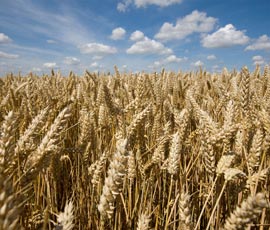 US regulators are probing the shock discovery of unlicensed GM wheat found growing on a farm in Oregon.

Further testing by USDA laboratories indicates the presence of the same GM glyphosate-resistant wheat variety that Monsanto was authorised to field test in 16 states from 1998 to 2005.

Analysts at Oregon State University confirmed the presence of GM glyphosate tolerance traits in the wheat. So far no data on the levels of contamination has been released, and there is no evidence that contaminated wheat grains have entered the market.

How the contaminated plants got on to the farm remains a complete mystery. No GM wheat is authorised for commercial growing in the USA. The USDA has not approved any test sites for the GM wheat found in Oregon, but 100 test sites of the same wheat were grown in 16 US states between 1998 and 2005.

Following the discovery, the USDA and the Animal and Plant Health Inspection Service (APHIS) issued a statement saying the RR GM trait in the wheat was “as safe” as conventional wheat, an assertion based on data provided by Monsanto. However, no full safety assessment has been carried out on the GM wheat.

APHIS said Oregon exports 90% of its wheat, some of which goes to food aid. All states where the GM wheat was grown experimentally will need urgently to check grain and crops for contamination.

The EU does not permit the import of unauthorised GM traits in food at any level, although up to 0.1% is allowed in animal feed if the GM variety is approved in other countries or an application to the EU has been reviewed by the European Food Safety Agency.

“An urgent investigation needs to try to understand how the GM wheat came to grow in Oregon, and a swift and thorough clean-up is needed to prevent the contamination spreading – if it hasn’t already,” added Mr Riley.

“Port authorities right across the world need to be on alert and closely monitor US wheat shipments to ensure all GM wheat is detected and prevented from entering the market.”

GM Freeze has repeatedly pointed out that coexistence of GM and non-GM crops without contamination is almost impossible because of the difficulties in containing GM pollen and seeds and the fact that human error can never be eliminated.

But a spokesman for Monsanto said: “While Monsanto will work with the USDA to get to the bottom of the reported GM wheat detection, there are no food, feed, environmental or safety concerns associated with the presence of the Roundup Ready gene if it is found to be present in wheat.”

The incident coincides with the second year of GM wheat trials at Rothamsted Research in Hertfordshire.