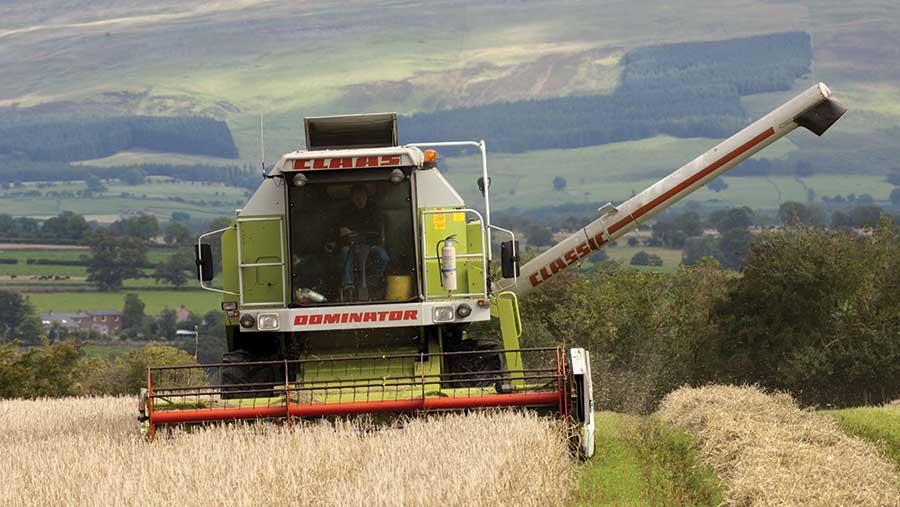 Growers adopting spring barley to address rotational pressures are advised to adopt a high-yielding dual-purpose variety and go all out for maximum yield.

Latest forecasts are predicting the 2016 spring barley area will be up 10% to 727,000ha – the highest since 2009 – largely at the expense of oilseed rape and winter barley.

The land contributing to the 10% jump is likely to be heavy and infested with blackgrass, with growers choosing to switch to spring cropping to maximise out-of-crop control of the problem grassweed.

And with new high output varieties with good quality characteristics available, one Yorkshire-based agronomist is advising his clients to take a less traditional approach to spring barley growing.

AICC chairman Patrick Stephenson says delayed drilling of winter cereals on heavy land is tricky in the likely event late autumn conditions become sticky in his area, which is driving an increase in his spring barley plantings.

“Delayed drilling is a non-runner in the North and this year I have some wheat drilled on 17 October where we were unable to cover the seed, so couldn’t use the appropriate pre-emergence herbicides without damaging the crop.

“That’s not a good place to be with blackgrass, so for us, delayed drilling is in the spring,” he explains.

“Spring wheat poses a risk in the North due to its later maturity and after that you are running short of options, so spring barley will be people’s go-to crop.”

Irina has full – and Planet provisional – Institute of Brewing and Distilling (IBD) malting approval for brewing use and both offer high yield and the potential to provide growers with a chance of finding a premium outlet.

Mr Stephenson believes the two varieties will compete for the increasing heavy land market, while traditional malt growers on lighter land will continue to opt for market favourites such as Propino and Concerto.

“On these [heavy land] farms you can never expect to get malting quality, but if you can get 8t/ha consistently, that is better than a second wheat,” says Mr Stephenson.

However, he says for Planet and Irina it is still a little early to be confident of end-user acceptance, so unless growers are prepared to sell them as feed, a variety such as Propino may provide a more flexible option.

“You could be miffed if you were to get malt quality, but you are unable to find a market for it.

“However, both have passed tests so far and there has been a demand for heavy land malting barley where grain nitrogen was slightly higher than in traditional malt growing areas, where they were unusually low,” he explains.

Where possible, he advises new spring barley growers unsure of marketing options to use contracts or grain pools to manage risk, fixing a base feed price and retaining the chance of a premium if malting spec is met.

The fact that growers never grew or moved away from spring barley on heavier soils that are now riddled with blackgrass suggests adopting the crop again will come with challenges.

Establishment is crucial to success in any crop, but in spring barley, a short tillering period and an inability to compensate for low shoot numbers by producing more grain sites puts more emphasis on getting plant populations right.

While spring barley growers on the South Downs can happily drill the crop in February and expect it to come flying out the ground in healthy numbers, heavy soils are a different ball game.

“You tend to drill later and seed-beds are not always good, so to get sufficient plants you might have to drill 200-220kg/ha to achieve 350-400 plants/sq m,” explains Mr Stephenson.

“After that, you also need to ensure you use sufficient nitrogen to sustain a higher-yielding crop and I’ll be looking to apply in excess of 150kg/ha of N to get the yield level we want.”

Pushing the crop with higher nitrogen rates will result in lush crops with higher disease, lodging and brackling risk, so Mr Stephenson says growers will need to be “on the ball” with fungicide and plant growth regulator (PGR) applications.

“I think you can afford to spend a bit more cash pushing for yield, but the crop is in the ground for less time and there are still opportunities to save money,” he adds.

Mr Shand also points out that if blackgrass is present, there might be an increased risk of ergot, which may lead to rejections and cleaning costs.

“It may be something you have to accept as part of a longer-term plan to get on top of the weed.”