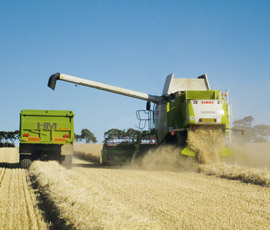 “We haven’t downloaded the data from the combine yet but while the yield won’t break any records, I don’t think it will be too bad,” he said.

So far he had cut 100ha of Flagon, and many other farmers in the area had also made reasonable inroads before light rain this morning.

“We share a combine, and it’s over at the other farm today – I think they’ll probably get on at about lunchtime,” added Mr England.

He planned to start cutting oilseed rape towards the end of this week, or early next week, depending on the weather.

“It’s very variable; we won’t be able to go in and cut a complete field – I think it will be a case of taking bits and bobs here and there.”

Although he had redrilled some rapeseed following rabbit damage and poor establishment, the rest looked surprisingly reasonable.

“We won’t know until we get into it, but I don’t think it will be the disaster that it looked to be originally.”