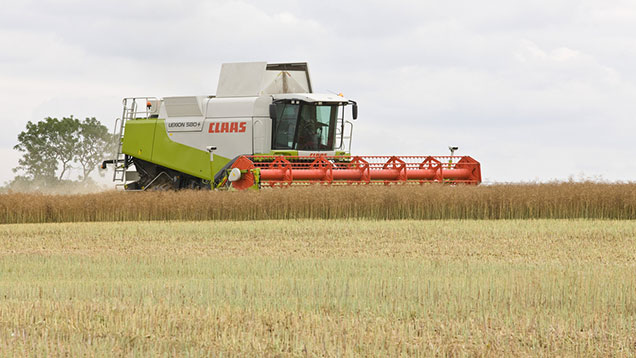 Hopes are rising for above-average oilseed rape yields after a generally good growing season, with harvesting set to kick off in earnest this weekend.

This will help compensate for low rapeseed prices, although there are some concerns over small seed size after a week-long heatwave in late June.

After a scattering of winter barley and rapeseed crops were cut in southern England last week, many plan to start harvesting in south and eastern England at the end of the week after recent rain.

“We would expect the yield potential to be better than average, higher than 3.5t/ha, as generally crops look well.”
Peter Berry, Adas

Crop experts expect yields to be higher than the five-year average of 3.5t/ha after a cool and dry spring and early summer – which was good for growth – and a low-disease year.

“We would expect the yield potential to be better than average, higher than 3.5t/ha, as generally crops look well,” says Peter Berry, oilseed rape expert at crop scientists group Adas.

The season mirrored that of the high-yield year of 2011, with a cool, dry, sunny summer that gave a long pod-fill period and the highest ever average yield of 3.91t/ha.

The area to be harvested has fallen for the third successive year, down 7% to 627,000ha, and with average yields of 3.5t/ha, this would give a harvest of 2.2m tonnes.

Philip Kimber, oilseeds trading manager at Frontier, says there is potential for good yields, with current prices supported by bad weather concerns for oilseed crops around the world.

“After a decent growing season, we are optimistic for some good yields,” says Mr Kimber. He is forecasting a harvest of 2.2m-2.4m tonnes, with harvest prices at about £255/t ex-farm.

Jack Watts, senior analyst at the AHDB, believes yields could be between 3.5t/ha and the 3.9t/ha seen in 2011 unless there is heavy rain at harvest.

One worry is that the spell of hot weather in late June and early July could have restricted the size of seeds, which can lead to lower oil content, says Richard Elsdon, technical manager at farming co-operative United Oilseeds.

“One concern is that we have seen small seeds from some crops, which could lead to lower average oil levels,” says Mr Elsdon.

With low rapeseed prices, growers are more reliant on oil bonuses, so any oil contents reduction would be a big blow to returns.

However, the seed-filling period usually covers some six weeks from late May to early July, so the full effect of the heatwave on yields has still to be seen.

Geoff Hall at plant breeder Monsanto, which has a 40% share of the oilseed rape seed market with varieties such as Extrovert and Exalte, says a short flowering period has left open crops with lots of light penetration into a deep canopy, which should lead to high yields.

“Generally, the yield potential looks good after good flowering and pod-set periods,” adds Mr Hall, who is the group’s commercial lead for seed and traits in north-west Europe.

He expects the area drilled to oilseed rape this summer to fall for the fourth year in a row, down by nearly 5% to close to 600,000ha.