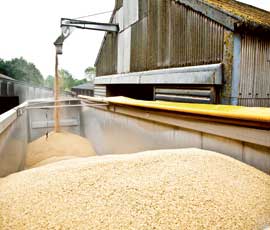 Grain prices have recovered much of last week’s losses, but remain unpredictable after such extreme fluctuations, say traders.

Feed wheat values bounced back by £9/t as Farmers Weekly went to press on Wednesday (2 March), to average £194/t ex-farm for spot movement. That followed a £15/t drop the previous week, triggered by a massive sell-off of futures held by financial funds, following the civil unrest in Libya. But prices dropped to unsustainably low levels, and are having to recover to slow down demand and encourage increased production, says analyst Rabobank.

“Grain and oilseed prices are likely to find support from consumers who have shown an increase in buying activity amidst this pullback in prices. We expect volatility will continue to increase in coming months as prices consolidate near current levels, before continuing their rise into the Northern hemisphere’s spring planting season.”

Paris rapeseed futures actually ended the week to Tuesday €4.75 (£4/t) down, but that masks a huge variability throughout, says Jonathan Lane at Gleadell Agriculture. “After this big shake out, we would hope the market ought to refocus on the fundamentals. Biodiesel margins are very healthy again; the European supply and demand remains tight and prices should start to stabilise now.”