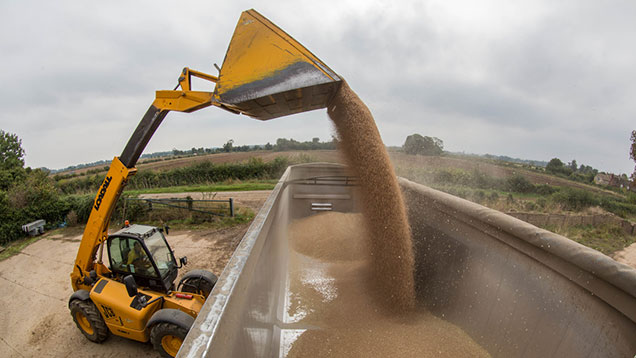 Grain prices have fallen this week despite EU crop forecasts from several sources reducing the likely size of the European grain harvest.

Late Friday saw the London feed wheat futures contract for November at £120.80/t, down about £3/t on the previous week’s close. Ex-farm values ranged upwards from £106/t as available.

UK winter barley yields at about 7t/ha are 0.5t/ha above their five-year average and reports of good quality French spring malting barley results have added pressure to European grain prices.

However quality ratings for the French maize crop have dropped sharply as its potential is increasingly curtailed by hot, dry weather.

EU exports have kicked off the new season at a higher level than the previous year, with soft wheat export licences awarded for 1.6m tonnes by 28 July (compared with 1.3m to same date last year)

The main report to come out this week (Thursday 30 July) was from the International Grains Council, which expects the world to produce 1.97m tonnes of grain this season, just 2% less than the previous year’s record.

Lower production of EU wheat and maize and Canadian wheat, barley and oats will be outweighed by gains elsewhere, mainly from higher maize production in China and sorghum in the US.

End of year stocks across all grains are expected to fall slightly thanks to marginally higher trade and consumption.

World wheat production for 20150-16 is forecast by IGC at 710.3m tonnes, with consumption at 707m tonnes and a slight fall in carryover stock.