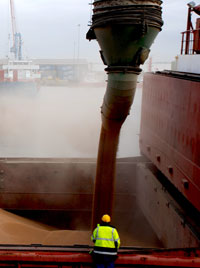 Spot grain prices have firmed again this week, though the message from traders is that the market remains volatile and farmers should not rely on the upturn continuing for the rest of the season.

As Farmers Weekly went to press on Wednesday (21 January), ex-farm wheat was trading at about £107/t, a new high for the season and £24/t more than it was worth when the market bottomed out in late October. Barley was valued at £95/t, up £4/t on the week.

The main driver has been the continued collapse in sterling, which has helped maintain export competitiveness, while making imports more expensive.

Having recovered from the record low against the euro at the end of December, the pound took another dive this week, reaching just €1.06 on Wednesday, equivalent to 94p/euro, amid further concerns about the state of the UK economy.

But while this had some immediate benefit for ex-farm grain prices, HGCA economist Michael Mendelsohn says there are many other factors at play.

“Most of the grain we trade is feed grain, so we are very much influenced by developments on the world corn market,” he said. “We are seeing two conflicting pressures – the drought in South America which has hit production, and the fight for area between corn and soya in North America.”

The US department of agriculture last week posted an increase in the corn crop for 2008, which caused prices to slip. But weather news from Argentina later in the week prompted a recovery, which continued into this week. On Wednesday, corn was trading on the Chicago exchange at $150/t, up $30/t since early December.

According to Mr Mendelsohn, the EU grain market was following these trends, and the UK was enjoying the additional boost from currency. As such, the UK had managed to shift almost half its 4m tonne export surplus by Christmas.

But the world stock-to-use ratio was still in the “danger zone”, so markets were liable to violent swings. “That’s why we are always going on about risk management,” said Mr Mandelsohn. “Farmers should think about taking out an option, or if they see a price that makes sense, take it rather than waiting for the extra fiver.”

David Sheppard, managing director of Gleadell, believed that, given the market fundamentals of a large world crop and weaker demand, the recent market rally could easily swing the other way.

“Our book is busy for January and February, but then we run into a brick wall,” he said. “There is plenty of cheaper grain from Bulgaria and the Ukraine out there, so, despite the weak pound, we expect to see a significant carry into the new season.” 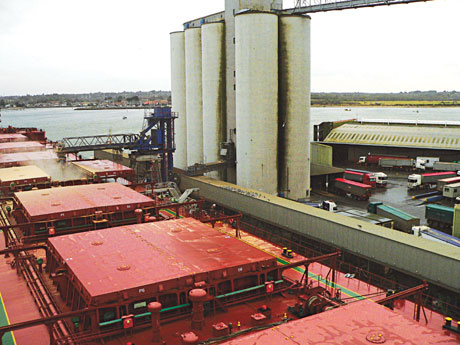 The MV Domina is loaded with 50,000t of feed wheat drawn from farms across the south of England by Frontier at Southampton Grain Terminal. She is now bound for China, where the cargo will be milled for animal feed after its month-long journey.

About 300 articulated lorries tipped each day at the Southampton Grain Terminal, a joint venture between French company Soufflet and Frontier. The vessel was loaded at 1000t/hr and will take nearly a week to unload when it reaches its destination.

Nick Burchell, wheat trader at Frontier, said there was a real opportunity for farmers to sell into market rallies like this. “The trade was right, the currency was right and the ship was available for the cargo.”

With a large exportable surplus still to shift, the industry needed sales outside the EU, he added. But this was being made easier by the drop in the cost of sea freight. “On some journeys, the price is a third of what it would have cost last year.”