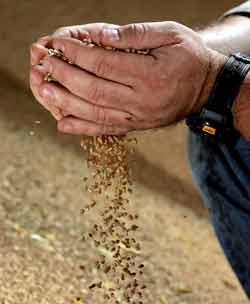 Grain markets have failed to recover in value this year in the same way that other commodities and investments have, with the fundamentals of supply and demand keeping a lid on prices.

Addressing this week’s HGCA Market Outlook conference in London, senior analyst Jack Watts showed how crude oil prices had climbed by 60% since March 2009, while the New York stock exchange was about 30% up.

But wheat values had continued to languish and were about 30% lower than they were when the 2008/09 season ended in June. Over that period, investors had exited the market, he explained, while the weakness of the US $ against the € had also weighed down on international grain values.

It was the fundamentals of supply and demand that continued to affect the market. While global wheat production was expected to be down in 2009 compared with last year’s record crop, it was still likely to exceed demand and the USDA was predicting another increase in global wheat stocks to over 188m tonnes.

In contrast, feed grains such as maize and barley were likely to see a contraction in stock levels, but this was not as severe as once seemed likely, due to the upward revision in US maize production estimates in September.

There was good availability of wheat worldwide, said Mr Watts, with Russia in particular holding opening stocks of 8m tonnes. Meanwhile, many of the world’s traditional buyers of grain in North Africa and Asia had had better harvests, so reducing their import requirements.

Driven by these factors, markets in the USA, Europe and London had all slumped since June, though wheat had dropped by more than maize, making it more competitive as a feed grain.

The good news for UK growers was grain quality was better this season, while the export surplus was lower, so reducing the discount to the French market. With the Ensus bioethanol plant in Teesside due to come on stream this season, domestic demand for wheat will also get a boost.

* For a FW comment from the HGCA conference, see Phil Clarke’s Business Blog