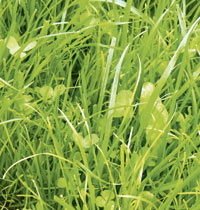 Green manures are a vital component in organic soil fertility and, with high fertiliser prices, it could be time for conventional farmers to reconsider their grass rotation.

Speaking at a recent event at Duchy College, Rosewarne, Cornwall, Anton Rosenfeld of Garden Organic said green manures did a lot more than add nitrogen to the soil. They could also be used to stimulate microbiological life in the soil; improve soil structure; prevent leaching of nitrogen over winter; and clean up weeds, pests and diseases.

With some legumes fixing nitrogen very quickly, and others building fertility over the longer term, farmers had to decide what they wanted from the crop, and choose their species accordingly, he said.

Producers seeking a quick nitrogen fix should opt for Crimson or Persian clover, vetch or fenugreek. All provided rapid growth and were less susceptible to disease than Red clover. However, Crimson clover sometimes suffered from poor establishment, and fenugreek would taint milk when grazed.

Excellent two-year options included Red clover and Sweet clover – although producers needed to be careful of nematodes and sclerotinia in Red clover, which required a five-year rotation. Sweet clover could prove tricky to establish, and while it could be grazed, it could not be used for silage as it became spiny when dried, said Mr Rosenfeld.

The most common long-term solutions for grazing leys were white clover and lucerne. “White clover is slow to establish, but once it gets going it gives very good cover.”

Lucerne was also slow to grow in the first year, but very prolific in later years. “When it’s producing a lot of biomass, it is fixing a lot of nitrogen for you.” It was particularly good on light soils with low rainfall, but did not perform well on soils with poor drainage, he added.

Chris Duller, project officer at the Institute for Biological, Environmental and Rural Scien-ces (IBERS), said there were huge differences between clover varieties. “It’s all very well talking about species, but you’ve got to think about varieties as well. The variety has got to suit your management strategy.”

The Grassland Development Centre was always working on new varieties to meet farmers’ goals of balanced swards, enhanced persistency and reliability, and greater flexibility for grazing and silage production. Ideally, clovers should make up about 30% of a mixed sward over the year – more in summer and less in winter.

Red clover was less persistent, and better suited to silage production than intensive grazing, said Mr Duller. Rarely lasting more than three years, it produced high yields of 15t of dry matter/ha and contained top quality true protein. When grazed, it should be strip-grazed to minimise crown damage, and should not be used for sheep due to fertility problems.

Clover crops must be managed carefully to maximise nitrogen fixation, said Stephen Briggs, director of Abacus Organic Associates. “White clover fixes more nitrogen in the first two years than in later years, so when you’re after nitrogen most of that is done in the first couple of years.”

Cutting and mulching crops increased the nitrogen available to clovers, and reduced the amount of nitrogen they fixed from the atmosphere by 50-60kg/ha/year. Applying nitrogen fertiliser would do the same, making it an expensive and unnecessary operation, he added.

Forage crop alternatives over the winter, which would prevent nitrogen leaching, included stubble turnips, forage rape and kale; while vetch could be grown with oats, or triticale with lupins for wholecrop silage mixes.