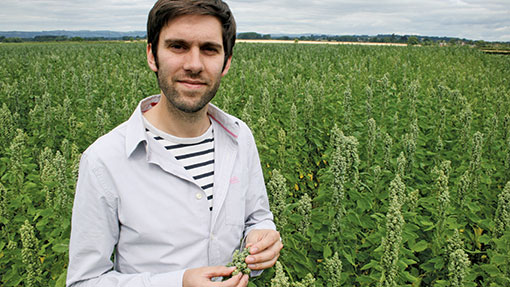 A surge of interest in quinoa is offering new opportunities to British growers, with Shropshire providing the unlikely heart of UK quinoa production. Luke Casswell reports.

British quinoa is a healthy crop with a healthy future, according to the first large-scale commercial UK grower.

UK shores have seen a swell of interest in the protein rich “super food”, which has become much more prevalent in premium salads and health food shops.

Quinoa producer Stephen Jones believes that with prices of £1,000/t and a slump in oilseed rape and cereal prices, growers looking for alternatives should look no further.

“There is a growing demand not only in foods that have good nutritional content, but also home-grown, British-produced food,” he explains.

Based on his 300ha family farm in Hordley, Ellesmere, just north of Shrewsbury, Mr Jones and his father have been trialling the typically South American-grown crop since 2006.

In 2012 they officially set up the British Quinoa Company and started working with other farmers to meet a rising demand.

“It has been grown for birdseed mixes before in the UK, but the breakthrough for producing a crop for human consumption came when we found the Dutch-bred varieties that were produced specifically for our climate,” he says.

Known as sweet quinoa varieties, they have been bred to have the bitter-tasting saponin coating removed, making them ideal for salads and a range of other foods.

Now Mr Jones owns the exclusive UK licence for the early-maturing, high-yielding varieties, growing them himself and offering buy-back contracts for other UK growers.

Mr Jones’s British-grown quinoa idea – spawned from food magazines lauding it as a nutritional wonder – has been developed over the years, amounting to him growing a commercial-scale crop and supplying high street food chain Pret-a-Manger.

Quinoa is an ancient grain, native to the Andes. Rich in protein, minerals and vitamins it has been declared a “super crop” by the UN.

How much does it cost in the supermarket?

About 70,000t of quinoa is grown in Bolivia and Peru each year, the majority of which is exported.

How to grow it?

Contact Stephen Jones, who holds the licences for UK varieties. He recommends growing a minimum of 5ha and urges growers to visit his crops to gain a better understanding.

This contract had previously been met with imported French crop, however, when this failed to keep up with the quinoa boom, Mr Jones’s UK grown grains filled the gap and flourished.

There are currently 48ha being grown for the British Quinoa Company, with growers from Bedfordshire and up into Lincolnshire and Norfolk.

“We have got more people starting next year, who are looking for alternatives to oilseed rape that offer good margins.”

Mr Jones offers buy-back contracts of £1,000/t, supplying the seed for £72/ha. They then buy back all the produce providing it meets all the stipulated quality requirements.

“As with any other crop, we have quality parameters, so the grain has got to be a nice bright colour, free of moulds and odours.

“There really is great demand for home-grown, quality quinoa. We now supply salad manufacturers and are hoping to produce our own bagged products this autumn.”

Fitting in to a farming system

Despite being situated in a dairy producing region, quinoa has thrived in the Shropshire climate and is forming an increasingly larger part of the Redhouse Farm rotation, which includes wheat, oilseed rape and maize.

“We are looking to cut down on our oilseed rape area because for us, quinoa is more profitable and attracts a much better price than wheat and rape.”

The crop has slotted in after the second wheat on Mr Jones’ farm, with it preferring the lighter soils that have less moisture retention.

“It is probably not suited to areas where there is a lot of heavier land or in regions that receive high levels of rainfall, such as further north,” he points out.

Sown in early April, growers have the opportunity of achieving a stale seed-bed and controlling weeds in the autumn, however, there are currently no approved fungicides or herbicides in the UK, which Mr Jones admits could cause issues in some weed-infested areas of land.

“It is certainly a more labour-intensive crop to grow because we don’t have a full range of chemicals available yet. This also makes it higher risk, but we have reflected this in the price offered to growers in their contracts.”

Despite the lack of chemicals on offer, Mr Jones and his father are still managing to match and surpass 2t/ha, which he sees as the typical yield for a UK grower.

This year the quinoa crop has managed to survive without any weed control at all on Mr Jones’ farm, and although an inter-row hoe was considered, Mr Jones says the quinoa had suppressed the weed so much, it was not needed. 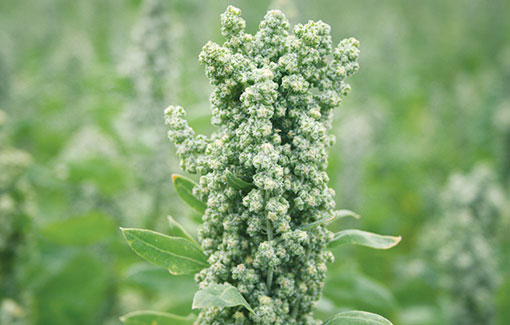 “It is very fast to germinate and emerge and explodes around May, rapidly going into stem elongation and producing a lot of leaves.”

However, broad-leaved weed control provides one of the biggest problems, with Fat Hen the main culprit, according to Mr Jones. He also points out growers in heavily infested blackgrass areas may struggle.

The lack of herbicides make the position in the rotation another important factor, with no control of oilseed rape volunteers a potential threat to production.

On the disease front, downy mildew represents the biggest challenge, but foliar phosphite sprays have been used to help manage the problem.

Mr Jones is now spearheading the request for extensions of authorisation for minor use (EAMUs) for a number of sprays that are also used in oilseed rape and hopes to get them approved in the near future.

Ploughing provides the basis for the seed-bed, which is then cultivated and drilled using a Lemken Solitair. This is a critical phase in the establishment of the crop, helping to achieve an accurate seed depth of 1cm.

“It is a small seed, so it needs to go into a fine seed-bed at a reasonably shallow depth, allowing it to get away quickly,” he says.

Quinoa then requires a standard rate of phosphate and potash according to where you are based and a similar amount of nitrogen fertiliser that would be applied to cereal crops.

It is finally ready to harvest towards the end of August and into September and can be cut using a conventional harvester before being sent off to be cleaned and ready to hit the streets.

The investment has not been small for the Jones’ family farm, with land being used for trials and taken out of conventional production into quinoa, while some of the largest investment has been into product registration.

However, with no end in sight for the quinoa boom, Mr Jones, who is currently finishing a PhD in plant science, hopes British-grown quinoa can hold its own and continue to flourish.