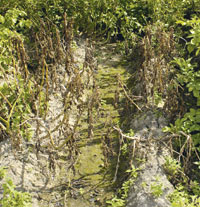 BASF is planning a series of grower meetings to promote the benefits of biotechnology this autumn, Farmers Weekly has learned.

The firm believes gaining farmer support is the first step in gaining acceptance for the technology.

“The farmer needs to be persuaded first. If they are convinced that GM technology is safe and has benefits they will start to ask for the product,” said Anne van Gastel, value chain management director for BASF’s plant science division.

Public opinion was also more likely to be swayed by farmers speaking out about the benefits of biotechnology. “I doubt consumers will believe our messages,” he admitted. “But if farmers start explaining the benefits [opinion could be altered] – they are more credible than we are.”

In Western Europe public opinion was driven by fear and a lack of trust in what science can deliver, he said.

A disconnect between the public and how food was produced didn’t help.

“To then suddenly try to talk about a technology that is difficult to understand is hard. The first emotion is fear. It is up to the farming industry to communicate better.”

BASF was developing two biotechnology potato products for the European market, he said. Amflora is a potato that only produces amylopectin starch used in industrial processing, while Fortuna is a blight-resistant variety.

“Since the political process on approving biotechnology introductions started again in 2006, the European Commission has had a hard time coming to a decision on Amflora.

However the indecision meant the firm was currently not willing to start any new projects where the main market will be Europe, he said.

The farmer meetings would demonstrate to UK growers what the technology could offer, how it had been applied in other countries and give some specific examples of the economic value of the technology, meeting organiser Andy Beadle explained.

Around four or five meetings have been set up, starting in October.

Globally farmers believed biotechnology was a key technology for the future as demonstrated by its rapid adoption, Peter Eckes, president of BASF Plant Science said at the firm’s European Agricultural Solutions press conference.

“Farmers believe these are superior solutions. Globally in 2008 125m ha were covered with plant biotech crops.”

Most of that area was in first generation traits of herbicide tolerance and insect resistance, but the biggest growth was ahead. “The market value is estimated to reach $50bn by 2025. The drivers for growth will be higher yields, with less inputs.”

The firm’s strategy was to focus on identification of traits, such as higher yield or drought tolerance, he said. It then looked to commercialise those traits in long-term partnerships with firms with good access to the market, including Monsanto.

“The most advanced product is our drought-tolerant maize, which should be available to USA farmers in 2012.”

But it could be useful in parts of Europe, he suggested. “In the maize farming area 5m ha out of 40m ha is faced with water deficiency. In these areas farmers have to irrigate or face losses. Our drought tolerant crops fit perfectly and could make a contribution to higher agricultural productivity and reduce water at the same time.”

The potential added value could be worth €500m, he said. “But it will depend on the political acceptance of GMO crops. I firmly believe that Europe cannot live in the future and be competitive and have sustainable agricultural without biotech.”