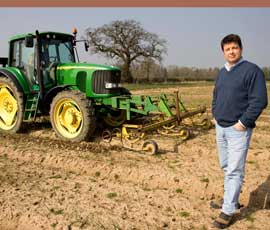 Another year down the line, beyond the launch of a forthcoming new John Deere range, and the decision may have turned out differently.

But for now, at least, Jon Parker, manager at Ragley Hall Farms near Stratford upon Avon, Warwickshire, and Farmer Focus writer is confident in his choice of a new tractor to tackle crop establishment next year.

“If the new John Deere 9R series was available now, we might have made a different choice in terms of make – but I wasn’t about to recommend spending £200,000 on a machine unseen and untried,” he says.

“What wouldn’t have changed is our decision to go back to tyres from tracks,” Mr Parker adds. “I had particular concerns about localised compaction on headlands that I think a different style of tractor and modern tyres will resolve.”

Ragley Hall Farms’ new principal tractor faces a hefty workload when it gets stuck into the post-harvest rush next year, handling the bulk of land preparation and all sowing for 607ha (1,500 acres) each of oilseed rape and winter wheat.

Crop production has been simplified since Mr Parker’s appointment just over nine years ago, when surplus tractors and machinery were sold off to help fund an all-out conversion to min-till.

“We kept the main power unit, a New Holland-Versatile articulated four-wheel-drive tractor, but bought bigger, wider and more efficient machinery, including a decent drill,” notes Mr Parker. “The aim was to establish crops at the least possible cost to improve margins at a time of low market prices.”

A 4.5m mounted subsoiler was converted for one-pass oilseed rape establishment by fitting a broadcasting system. Apart from minimising costs, this approach ensured the crop could put down deep roots, and the entire arable acreage would be subsoiled once every two years to keep the heavy soils permeable.

“It all worked well for the first few years when we had nice, dry conditions,” Mr Parker recalls. “But a couple of wet years brought a reality check – the heavy Solo drill and the tractor struggled with wet, strawy seed-beds.

“On top of that, we had an increasingly difficult problem with blackgrass, including a herbicide resistant population,” he adds. “Together, these issues meant we were getting some disappointing yields.”

Ploughing was re-introduced to combat the blackgrass issue and as a fall-back option in a wet season using a nine-furrow mounted Dowdeswell plough.

At about the same time, worrying noises from the ageing tractor prompted plans for a replacement.

“We had a 485hp rubber-tracked John Deere 9520T on test for three days and it really impressed, pulling the drill easily in wettish conditions and tackling our steeper banks without difficulty,” says Mr Parker. “A Quadtrac would probably have done just as well, but the difference in cost meant we could afford a new Vaderstad drill as well.”

The machine settled into a regular post-harvest routine, subsoiling and broadcasting oilseed rape in one pass, then hitting stubbles for the next wheat crops at up to 30ha a day using the 4.5m Solo.

“I was very pleased with the tractor, it had performed well with nothing more than a few niggles along the way,” Mr Parker says. “Mobility wasn’t too much of an issue because we’re largely ring-fenced, but at 4m wide it is a handful when you have to go down a narrow lane.

“My only real concern was the 10-15% yield depression showing up on headlands, which I can only put down to the scuffing effect through turns,” he adds. “Using a big mounted plough isn’t ideal because of the concentration of weight transferred to the rear of the two tracks; but whatever the cause, the effect cancelled out the general improvements we’d made in crop performance.”

All options were open, than, as arrangements were made to assess different tractors on the heavy cultivator, including smaller and lighter tracked tractors from Deere and Challenger, a Quadtrac again and a wheeled interloper – a 557hp New Holland T9.560 articulated four-wheel drive.

“The land has generally become much easier to work since adopting mintill and subsoiling routinely,” says Mr Parker. “So much so, that we now run the Solo tines at 8in rather than 12in deep, which makes a huge difference to the draft pull.”

Even so, the performance of the two smaller tracked machines was considered marginal for the heavy land and rolling topography, and while the Quadtrac priced itself out of the equation again, the new T9 running on 900/60R42 Trelleborg TM900 High Power radials came up trumps.

“Hitched up to the Solo, it matched the big Deere crawler for output; even on our steeper banks, it coped really well,” says Mr Parker. “The narrow frame means it’s not too wide even with the big tyres, and we’ll manage its weight, ballasting the tractor up to the hilt for cultivations, then bringing it down from just over 22t to less than 17t for drilling.”

Although the tractor is again designed to perform best pulling trailed equipment, two fat squashy tyres will support the weight of the big plough rather than unforgiving tracks – and the pivot-chassis steering means there is no surface scuffing.

“With advances in tyre technology and the improvement we’ve seen in soil structure since starting min-till, I’m confident the wheeled tractor will be up to job while resolving our headland issue,” says Mr Parker.