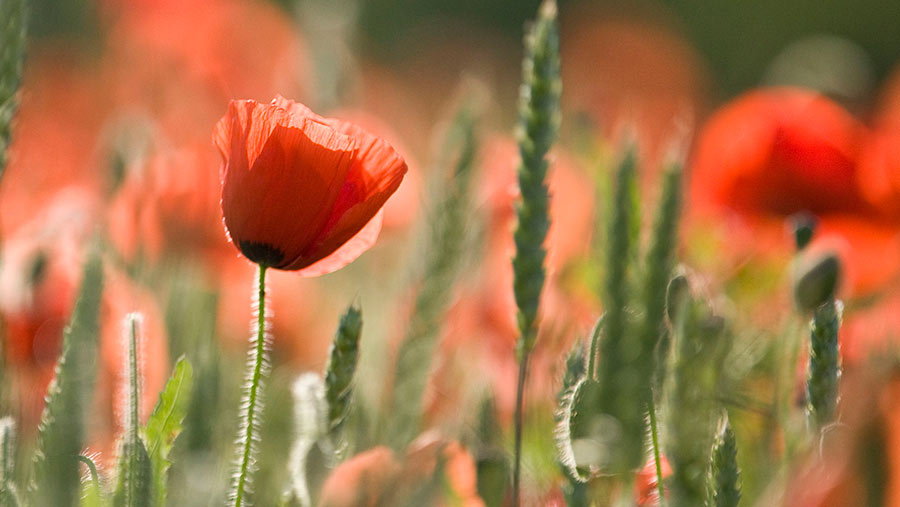 Cereal growers need to switch herbicides and break their reliance on a popular group of products to prevent broad-leaved weed resistance building up.

Broad-leaved weeds such as poppies, chickweed and mayweed show some resistance to sulfonylureas (SUs) herbicides, which include Ally and Atlantis products, and experts say growers need to look at alternatives.

Lynn Tatnell, weed specialist at crop consultants Adas, said where resistance is seen growers should not just use acetolactate synthase (ALS) inhibiting herbicides, of which SUs are the most popular sub-group.

“Rotate your chemistry as much as your can.

Wider rotations will hopefully bring in new crops which will require the use of different groups of herbicides, Dr Tatnell added.

See also: Help is at hand to cope with resistant broad-leaved weeds

The problem of resistant broad-leaved weeds has been masked by the widespread use of effective residual blackgrass autumn herbicides, but resistant weeds are being found in blackgrass-free light land and in spring crops.

Resistant poppy is the most common, followed by chickweed and mayweed.

A just-completed four-year study by Adas looking at preventing the widescale increase in ALS-resistant broad-leaved weeds has highlighted the need to use more non-ALS options to manage resistance.

She pointed to alternative herbicides to SUs such as pendimethalin, diflufenican, halauxifen and older hormone-type herbicides such as MCPA and mecoprop.

Resistant poppy seeds are likely to persist in the soil for more than 10 years, so it is unlikely that SUs will ever be effective for control of poppies in affected fields.

Mike Thompson, an independent crop consultant based in Norfolk, said he had seen resistant poppies in spring cereals where only SUs were used, and chickweed resistance on peaty soils where the efficacy of autumn residual products was impaired by the high organic matter soils, and he had to use Starane Gold (containing florasulam).

“Historically, I would have relied on SUs in spring cereals, but now I mix products. Luckily, as soon as you know you have resistance then you can do something about it,” he told the briefing.

He has turned to pendimethalin and also to diflufenican for tough mayweed, while he is also using a pendimethalin-picolinafen mix.

Cultural controls, such as spring cropping, have limited impact on poppies as its seed is persistent in the soil, and the weed favours light land which is not traditionally bad blackgrass land so does not receive complex autumn residual herbicide programmes.

Iain Ford, herbicide specialist at BASF, said SUs have been good for the post-emergence timing, but there is a need for alternative chemistry which works better and earlier.

“We need to learn the lessons from blackgrass resistance and not fall into some of the traps. So do not rely on ALS inhibitors for broad-leaved weed control, integrate other modes of action,” he added.

A new approval has been granted for the group’s pendimethalin-picolinafen product for use in spring barley and spring wheat, which can be used both pre and post emergence and has both residual and contact action, said Mr Ford.