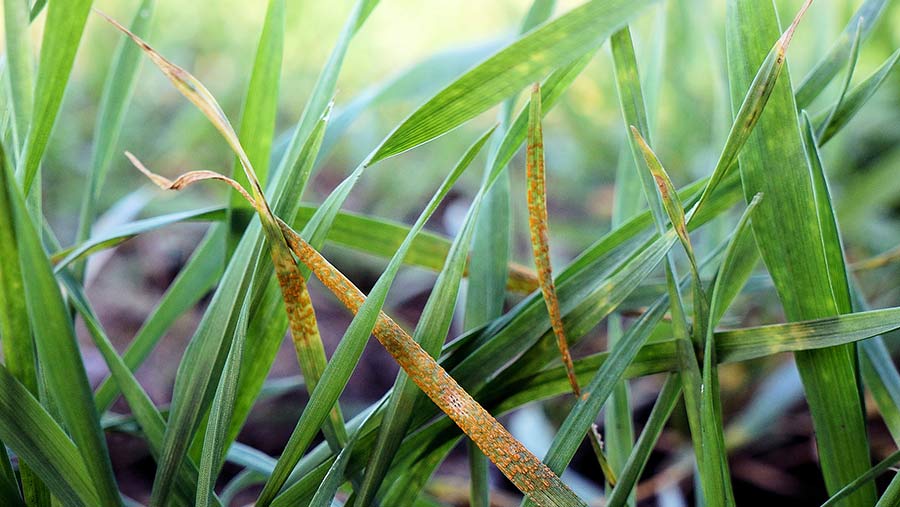 by Blackthorn Arable FREE TO USE

Growers and agronomists are flagging up dozens of cases of disease being found in wheat and oilseed rape crops right across the country.

High levels of septoria have been reported in wheat crops from East Lothian to Hampshire and Herefordshire to Northumberland, with certain varieties seen to be consistently fairing worse than others.

The levels of yellow rust in winter wheat is also cause for concern, with particular hotspots being highlighted in Norfolk, Suffolk, Nottinghamshire, Lincolnshire and the Midlands.

We have culminated a hefty list of tweets from growers and agronomists to form a general picture of the disease pressures lurking in crops this spring.

@ianholmes20 @Blackthorncox high levels of septoria and on forward crops a lot of mildew.
Cleanest vars are Graham and Costello

There is a lot of septoria at the @Bayer4CropsUK demo site in Hambledon, though little rust & mildew is frosted off. pic.twitter.com/lIEaM0ekjs

Hoping for a dry time between GS32 and flag leaf or this Septoria is going to be a problem #organicwheat pic.twitter.com/DuOmmHUirg

@gaff1wiz It's our only variety, of the 30 in the screen, with YR present. Mid October drilling too. Septoria very high on all the varieties

Plenty of septoria on these older leaves in Skyfall. New growth looking cleaner, can't afford to be complacent pic.twitter.com/nYRtbCAn7n

Pretty much sums up wheats today – bit of septoria with a dash of slug damage pic.twitter.com/w1B5qGjCGe

@olihillFW septoria is fairly bad in most varieties.It seems that early drilling this year was anything from September to end of October!

@LinesDavid reflection has yellow rust in Notts, actually more so than Santiago pic.twitter.com/M5kmuU2se4

Yellow Rust showing all over crops of Reflection wheat. Whilst controllable, I think farmers may shy away next year? pic.twitter.com/YXBl1NDRdk

Plenty of yellow rust still to be found on #wheat obs plots in Lincolnshire @LGSeedsUK. pic.twitter.com/Z5SFX930s7

Watch out for #Phoma and light leaf spot in the #Suffolk area! Thanks for the heads up @georgiemaywood #iOSR pic.twitter.com/OIhAhl9zEV

Plenty of Light Leaf Spot in the untreated trials in the Cotswolds #osr #disease #lls pic.twitter.com/mGRZu1lwr4