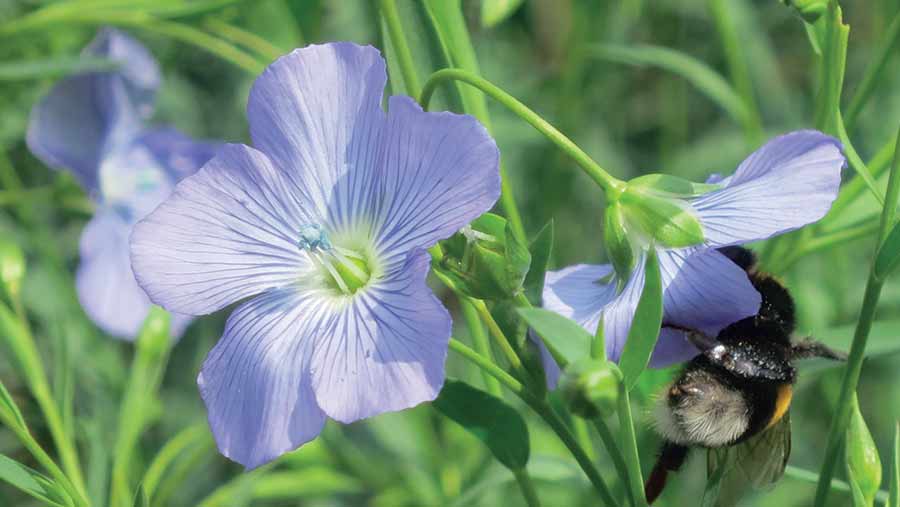 A combination of oilseed rape falling out of favour, the low cost of growing linseed and a high yielding, early maturing variety is fuelling renewed interest in the crop.

On top of this is the attraction of selling into a market that is not oversupplied and helping meet the three-crop rule.

Andrew Wallis of Boston Seeds says: “Seed sales so far this year are way ahead of the previous three to four years.”

One of the reasons is the relative value of linseed.

Feed beans are normally around two-thirds the value of linseed, but with linseed at £350/t and feed beans at £120/t, it is only one-third of the value.

Most linseed is exported into food markets in France and for crushing in Belgium.

He also highlights linseed is cheap to grow with variable costs of £195/ha compared with £215/ha for peas. It has a flexible sowing date, being one of the last spring crops to drill.

Another reason for its resurgence is the availability of a variety grown widely for the first time last season, which offers high yield and early maturity.

Batsman is the second highest yielder on the list at 103% and is earlier maturing than the top yielder Juliet (3 versus 6 earliness score). AHDB says every one point equates to two to three days earlier harvest, adding up to seven to nine days.

Mark Nightingale, oilseed breeder at Elsoms says for 2015 which was a late year, it was nearer two weeks.

“Last year was a late year for linseed maturity and in our trial plots, we saw 10-14 days difference between varieties.

“This is quite a difference, especially when you are looking to establish a following wheat crop.”

Grower James Chamberlain has been growing linseed on and off for many years and last year, he grew 80ha for seed.

He farms 650ha near Shardlow in Derbyshire and linseed fits in his rotation on lighter land instead of a second wheat in a rotation including first wheat, winter barley and oilseed rape.

“Last summer it yielded over a tonne an acre.”

Good establishment is key to success and relies on going in when soils being warm enough with sufficient moisture so that crops are not held back.

For Mr Chamberlain, this is typically in late March and he aims to maximise seed/soil contact by producing a good seed-bed on his grade 3 sandy, gravel loam.

This is achieved by ploughing down in autumn and then power harrowing in spring to get a good tilth followed by rolls.

The two sites are being funded at the breeder’s own expense to generate more data.

Oilseed breeder Mark Nightingale explains that the sites are on different sides of Spalding on contrasting soils, adding to the range of soils in the data set.

“It needs to be in and then away as you don’t want it to linger,” he says.

On heavier soil, Mr Nightingale says it is it is down to farm practice.

He advises cultivating in the autumn to create a stale seed-bed and then take advantage of frosts.

In spring, “tickle the top” and roll the seed in.

“This approach of doing the bulk of the cultivations in the previous autumn works well on heavy land,” says Mr Nightingale.

Weeds control is not a problem with sulfonylurea herbicides giving good post-emergence control, such as Chekker (amidosulfuron + iodosulfuron) he used this season.

Botrytis can be a problem in wetter seasons and last year’s crop received a post flowering spray of Savannah (tebuconazole) “to avoid botrytis coming in, being a seed crop.”

“It does need a bit of fertiliser early doors to help it get away.”

He typically applies 120kg N, so is not a heavy user of nitrogen.

“We want it to stay standing.”

“This spring, it received three applications of Toppel (cypermethrin), as there was a nearby oilseed rape crop.”

While sowing at the right time is key, desiccation timing is also important some 150 days later.

“We normally spray off in the late teens to early 20s of August for cutting at the end of the month. We use Reglone (diquat), as you can’t use glyphosate on a seed crop.”