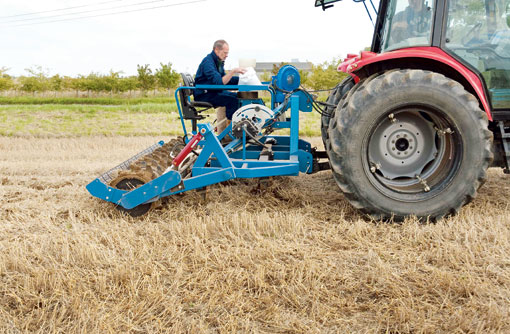 This year looks to be heading for another difficult late harvest, which may force a rethink on oilseed rape establishment this coming autumn with seed rates, variety choice and drilling date in the mix.

And growers in northern England as far south as Lincolnshire and the north Midlands may also benefit from considering varieties on the HGCA’s northern list.

As Openfield arable technical manager David Leaper explains, many growers struggled to achieve a good tilth last autumn and drill tines were just cutting a slot. Slugs then worked their way down the rows.

“They will, therefore, be rethinking their establishment technique and seed rates, with many being more cautious with low seed rates.”

But Mr Leaper urges growers to hold to the established practice of tailoring seed rates to the soil conditions.

“We have seen a move to low seed rates for very good reason and when conditions get tough, of course they need to be adjusted upwards to compensate for higher plant losses. However, the reality is that even much higher seed rates would not have saved the day even last year.

“We also know that slugs are likely to be a problem this season so growers should monitor activity with traps and treat as soon as thresholds are breached.”

Memories of last autumn will also see a move to earlier drilling, especially where land comes free early. However, in most situations there will again be pressure on establishment.

Not only are entry crops looking later, there are many broken rotations with more spring cropping, Mr Leaper says.

But he believes growers will stop drilling once September arrives, rather than persevere as they did last autumn and increase the risk of poor establishment.

“South of the Humber you can drill in mid-September most years and get away with it, but last year the soil temperature dropped, slugs and pigeons got in and many crops didn’t get away early enough in the following spring,” he adds.

“Soil temperature and tilth are key and growers should not dismiss September drilling outright based on their experience last autumn.”

Looking at variety choice, last year’s emphasis was on standing ability after the lodging in 2012, but, this season, autumn establishment and vigour will be the focus.

In the North, growers typically go for varieties with early vigour, particularly in North Yorkshire and Scotland as they typically drill early from the first week of August.

“This ensures crops get sufficient growth before the winter and hybrids fit this option.”

But for those further south looking to drill much earlier, he advises selecting slower developing types.

“You don’t want plants getting too much early growth, and conventional types are better suited, as well as specific hybrids, with a more continental growth habit.”

He also sees that many growers with oilseed rape following wheat are already reconsidering their crop choice.

“Those following wheat, which is looking late this season, need to question whether to drill oilseed rape and consider winter barley instead, aiming for an early entry in 2014, Mr Leaper says.

As Limagrain senior oilseed rape breeder Jo Bowman points out, the border between the HGCA’s northern and east/west list is officially around Scotch Corner in North Yorkshire.

“Conditions are clearly different in the North with different disease pressures, drilling dates, and this is reflected in variety types.”

The biggest requirement in the North is light leaf spot resistance and it can be devastating.

“It can strike before Christmas and kill the whole plant. But further south, it comes in spring and causes less damage.”

That is why varieties need a minimum score of 6 to make it onto the northern list, while the minimum is 3 for the east/west list. Further south, phoma is the key disease.

Dr Bowman believes the boundary between lists is arbitrary and, consequently, some varieties on the north list do well in Lincolnshire.

One example is Catana, which gives fantastic results further south, but had a low phoma score, so did not make it on the east/west list.

“Our biggest sales are in County Durham and also into Lincolnshire, and it has good standing power and light leaf spot resistance.”

Another is Anastasia, which tops the northern list for yield at 106%.

The key area is in the borders, down to north Lincolnshire and north Nottinghamshire.

The club root-resistant variety Cracker is more popular in Scotland.

“Anastasia has good light leaf spot resistance, is short at 150cm, and has good stem stiffness. It is medium to early to flower.”

Limagrain’s oilseeds product manager Les Daubney adds that growers can take reassurance that a variety on the north list has some robustness and an ability to perform in less than ideal conditions.

“Yorkshire is not Essex and they see an earlier onset of winter with a shorter day length. Growers recognise that varieties performing on the northern list will also perform in Yorkshire and Lincolnshire.

“They drill early in the North and these varieties suit early drilling and have good winter hardiness.”

High yields come down to getting more light hitting the pods, which fuels photosynthesis for seed development.

“The more days you get the sun shining on pods, the higher the yields. After flowering, you get a canopy of pods, which shades the lower pods, resulting in small pods with undeveloped white seed.”

He points to 2011 when conditions were dry and crops were stressed with higher temperatures.

“Plants didn’t branch and we got thin crops with no structure. But when it came to harvest, we got the highest national average yield from some of the worst-looking crops.”

“As crops were thin, light reached the ground and we saw pods all the way down the plant. So the trick is to establish thin crops reliably if you want high yields.”

Commenting on 2012 plots, the average yield was 4.2t/ha and crops were more consistent. “We saw much deeper rooting and crops were better looking with the wide system.”

Up to this year, the wide row plot trials were run alongside the national and Recommended List trials at the Lincolnshire site, but after changes to the HGCA protocol, all the variety trials at the site are now established using the wide-row system.

Seed rates were previously 120/sq m for conventionals and 70/sq m for hybrids. But now they are all established, with the aim of establishing 40 plants/sq m in the spring.

Mr Leaper adds that many growers have bought into the system with a move to lower seed rates. “More than half of oilseed rape is now grown in the wide-row system.”