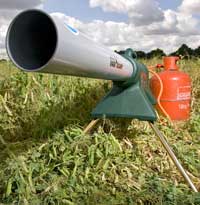 Farmers’ use of bird scarers could be curtailed unless growers follow new advice on how to use them considerately.

The NFU has published an updated Code of Practice designed to minimise public aggravation while allowing effective crop protection.

“Bird scarers are essential to protect many crops including oilseed rape, fruit and field vegetables from damage by wild birds,” it says.

“However, if used thoughtlessly they can seriously annoy and disturb the public, thus fuelling the pressure for strict legal controls or a ban on their use.

“Just a few inconsiderate actions could threaten the ability of all growers to protect their crops in future.”

The Code of Practice suggests that, if using auditory scarers, their operation near rights of way, hospitals, homes and schools should be minimised.

Avoid using them at least 200 metres from sensitive buildings before 7am (or before 6am elsewhere) and do not use them after 10pm, it suggests.

The guidance adds that baffles made from corrugated iron or straw bales should be used to concentrate the sound away from neighbours and towards the field.

It also suggests that auditory scarers should be avoided on a Sunday and an alternative found. Using a variety of scarers is a good idea anyway, it says, so that they retain their novelty to the birds.

Displaying the name and a contact number on a sign near the scarer is another suggestion so people know who to approach if there is a problem.

The Environmental Protection Act 1990 includes powers to deal with the nuisance from auditory bird scarers.

This legislation has been successfully used to stop offending farmers from using such scarers.


Do you follow this advice? Have you had complaints about bird scarers and how have you dealt with them?