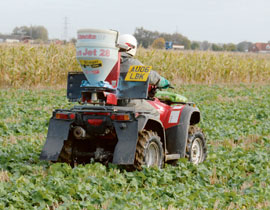 Carried out last autumn, the Metaldehyde Stewardship Group survey found that 54% of respondents said they had no idea what the new single dose was. When asked what the annual limit was, only 7% correctly identified the 710g ai/ha maximum in a calendar year.

Commenting on the results, MSG spokesman Colin Myram says it shows that total recommended dose rates of metaldehyde set out in the guidelines aren’t well understood. But he also urges caution in drawing conclusions.

“Some respondents were the business owners and were not the people actually applying the product.”

In addition, many growers think in terms of weight of product, which translates to different maximum kg/ha rates.

Therefore, this year’s campaign will focus on what the limits are in product terms. For example, the single maximum 210g dose equates to 4kg/ha for a 5% product and 7kg/ha of a 3% pellet.

Another focus in this year’s campaign is the evenness of spread, which is even more critical for effective control when applying lower strength products. “One way to improve evenness is to spread to 12m bouts rather than 24m.”

On a more positive note, Mr Myram highlights that 89% of respondents to the survey were aware of the “Get Pelletwise Code of Practice” while 94% claimed that they have adopted the best practice standards for using, handling and storing slug pellets.

• Find out more at Cereals 2011 (Stand D435 on Wednesday 15 June and Thursday 16 June. And check out Farmers Weekly’s series of slug control Academies. Earn 2 BASIS and 2 NRoSO points by correctly completing the online test at www.fwi.co.uk/academy

The maximum single dose and annual limit for metaldehyde is to remain the same for the coming season.

Set last year, the maximum single dose remains 210g ai/ha while the legal maximum permitted dose is 700g ai/ha, of which only 210g ai/ha can be applied during the autumn. However, the MSG urges BASIS advisers that, where possible, they should reduce the autumn rate to 160g ai/ha.