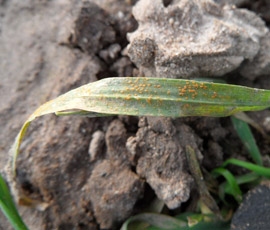 Wheat growers across the country are being warned of early rust attacks due to the warmer weather.

These are the findings from Syngenta’s countrywide monitoring programme, which has identified earlier than usual yellow and brown rust infections in wheat across 13 counties covering East Anglia, the south midlands and south west.

“With a high percentage of varieties planted this season having some degree of susceptibility to yellow or brown rust, or even both, it’s vital growers are on their guard,” warns Melanie Wardle, Syngenta campaign manager for cereals.

In most areas, the disease won’t require fungicide treatment until there are visible signs of rust, then spraying with a combined fungicide at T0 or consider a new generation SDHI fungicide later at T2. But as Mrs Wardle points out: “Here too it will be important to check that your SDHI provides sufficient rust protection.

“Where rust levels look likely to threaten yield it will be important to not only treat crops promptly, but also to ensure that key fungicides used in programmes provide significant rust activity,” she adds.