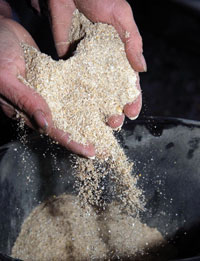 Organic businesses are struggling with high organic wheat prices, but one option may be to to grow oats.

Although there’s been an easing in the price of some organically grown cereals for use in poultry rations, the Soil Association believes farmers producing organic eggs and poultrymeat could reduce high feed costs by venturing into home-grown cereals.

Naked oats have certainly caught the attention of some small-scale organic poultry producers and with 40-50% of organic cereals now sourced from outside the UK, growing crops such as naked oats can help producers become less reliant on imports and more in control of their feed costs.

Anna Bassett of the Soil Association doesn’t expect organic cereal prices to fall below £350/t, a level which many organic egg producers still feel is taking a toll on margins.

“With organic producers looking ahead to 2012, when they must feed 100% organically grown cereals, it’s timely to be considering home-grown alternatives to maintain the quality of the ration and reduce the cost. There are still producers keen to switch to organic production, but most are coming from the livestock sector, so the UK shortfall in organically-grown cereals looks like continuing,” says Miss Bassett.

Research in Denmark is looking at providing organic poultry with crops specifically grown on-range to provide birds with a “self-pick” source of feed.

“These forage and seed crops will not make major inroads into the birds’ total feed needs, but they are a help and are one option we hope more UK producers might consider.

“Quinoa – widely grown as a game-cover crop – is also being looked at as a feed source for organic poultry. But it’s naked oats which is proving to be a relatively straightforward cereal option to grow and one that is proving popular. Organic poultry producers shouldn’t be daunted at the prospect of becoming small-scale arable growers this is a time for forward thinking and anything that can reduce costs, maintain the quality of the feed and reduce reliance on imports must be encouraged,” she says.

When considering the suitability of land for growing naked oats, they are able to cope with a variety of soil types, although the crop is not drought tolerant and yields will suffer in extreme dry conditions.

Ideally, soil acidity should be no lower than 5.8-6pH. Yields can be up to 8.5t/ha (3.4/acre) and the crop works well in rotation, although it shouldn’t be grown more than one year in four to avoid disease such as steel eelworm and oat mosaic virus.

The crop is best sown from mid-September to mid-October at a rate of about 100kg/ha (40/acre). Because conventionally grown naked oats require adequate levels of phosphate and potash in the seedbed, organic growers are urged to obtain a soil analysis on land intended for drilling. 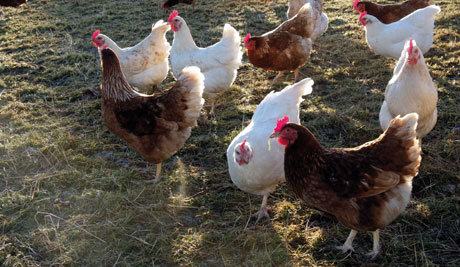 Manganese deficiency can be a problem if the crop is being grown organically. The crop should be harvested when the moisture level is under 20% and dried to a maximum of 14%. Naked oats will store for long periods without deterioration.

Heather McCalman of the IBERS Grassland Development Centre, Aberystwyth, says: “Naked oats are an ideal crop for marginal areas, where the climate and soils aren’t suitable for growing wheat and can help organic producers meet the 100% organic feed rule even on mainly grassland farms.

“As the crop is tolerant and flexible, we believe it has a role to play in helping organic poultry producers address concerns over the cost and sourcing of organic cereals.”

The centre has been co-ordinating a group of six organic producers interested in growing naked oats for home use or to sell to other producers.

“Oats in general are an ideal crop for marginal cereal growing areas, especially in organic systems where there is no resort to soluble fertilisers to boost fertility. They are also competitive against weeds, tending to form dense crops and are fairly disease resistant,” says Dr McCalman.

Naked oats, which fit in well with organic rotation systems, thresh free from their husks when combining and have a high energy and oil content, good protein with a favourable amino acid profile, making them particularly attractive for non-ruminants such as pigs and poultry.

“Naked oats, including varieties like Bullion or Zuton, which were bred at IBERS in Aberystwyth, are particularly valuable for poultry because they are dense in nutrients and have high quality protein,” she says.

As of this month (January), all poultry producers are required to provide at least 90% organic feed for their birds, to maintain the integrity of the organic product and meet consumer expectations.

“Organic systems emphasise self-sufficiency from the farm’s own resources wherever possible. In line with principles of sustainability, there will be an increasing requirement to use home-grown feeds in future,” says Dr McCalman. 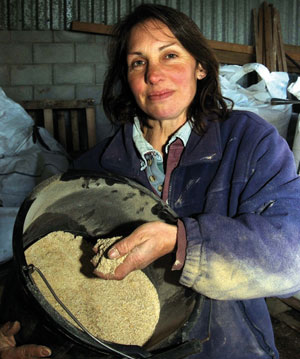 Even after only one year of growing naked oats to supply feed for an organic laying flock, west Wales egg producer Liz Findlay is convinced the crop can bring big savings to her annual feed bill.

Although still formulating a final ration based mainly on home-grown grains, initial costings show that the naked oat inclusion has saved £80-£100/t compared with her bought-in organic layers ration.

“I’m still buying in protein but now the ration comprises 50% home-grown triticale (milled) as well as 10% naked oats (fed whole) plus 40% of a bought-in concentrate. Next year I’ll be growing a bigger acreage of naked oats and including them in a much higher percentage of the ration which will also, hopefully, contain some home-grown peas,” said Mrs Findlay, who farms at Nantclyd Organics, near Aberystwyth.

Birds have performed well off the new home-grown mix and Mrs Findlay feels there’s no reason why she couldn’t feed a total diet of naked oats if she had to. The naked oats yielded 3t/ha (1.2t/acre).

She is one of the group of six farmers in Wales who have been involved with the IBERS naked oats project. With advice from Heather Macalman, 1.6ha (four acres) of Zuton naked oats were sown “rather late” on 23 April on the 12.1ha (30-acre) holding that also supports a small sheep flock and grows field vegetables, as well as running 1000 free-range layers. The farm is on marginal land running to 122m (400ft) in a “wet and windy” location.

“It’s not ideal cereal land, but the naked oats fit in well with my eight-year crop rotation that incorporates the vegetable crops and red-clover.

“I used to buy-in all my poultry feed, but it’s not only the rising price that made me rethink how I do things. A lot of the wheat was imported from countries about which I am dubious in terms of their organic growing standards. I was uncomfortable with that almost as much as I was with the £420 cost of the layers’ compound,” says Mrs Findlay, who runs her layers in mobile sheds of 200 birds each and rears all her own pullets from day-old.