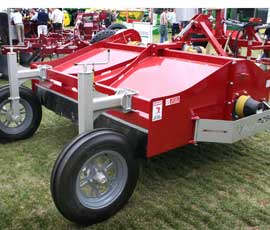 Growing potatoes holds many challenges – not least how to remove tops cleanly without leaving material that clogs up the harvester. Peter Hill compiled this round-up of the tools available.

The amount and type of haulm produced by different potato varieties and prevailing weather conditions play their part in making the topping operation a frustrating chore or a breeze. But so, too, can the topper design.

Good suction created by the flails is a key requirement to lift wilting haulm so it can be cut cleanly. The size, shape and configuration of the blades, and how tightly the hood encloses them, are influences here.

Then there is the question of what to do with the haulm once it has been severed – feed it off to one side or chop and deposit it into ridge bottoms or to the sides of beds.

“Our own topper, the Standen-Pearson FM-2, is available only in side delivery format because many growers like to remove the haulm from in front of the harvester,” says Alex Mathias of Standen Engineering. “That’s especially so if they’re growing varieties that produce large volumes of thick-stemmed haulm.”

The FM-2 has a hydraulically driven belt conveyor laid flat behind the flails, which is the most popular solution among topper manufacturers for its relative simplicity and light weight.

Baselier’s two-row side delivery topper, which Standen imports from The Netherlands, can have short tines on the belt to help shift material efficiently, as can the three-row version. This model has hydraulic left/right adjustment to match the offset working principle of the Standen-Pearson T3 three-row harvester.

Grimme’s KSA 75-2 topper has a belt inclined towards the flow of chopped haulm coming off the flails with the idea of conveying a more evenly spread load.

But Jones Engineering has dispensed with its conveyor option to offer only an auger design.

“Belts are fine in ideal conditions,” says Mark Clayton. “But when it’s wet, a build-up of soil and debris under the rollers can push the belt askew, which the operator can’t see, of course, and before long it’s damaged.”

The alternative to shifting the haulm off to one side is to cut and shred it, and then channel it into the ridge valleys or to the outsides of a bed.

A substantial centre plate, shaped to channel the airflow and haulm to the wheelings either side of a bed, is an extra-cost option on the Baselier two-, four- and six-row toppers, they are standard on Grimme machines of the same sizes and Scotts Potato Machinery will build a topper with either row or bed deflectors for the same money.

The 2.2m Reekie RHT 2200 takes a different approach by purposely spreading chopped haulm on to the ridges and across a bed.

“There are shredder plates and mouldings under the hood designed to create a lot of suction and to pulverize the haulm into fine, short sections that will pass through the harvester webs,” explains Steve Thorley of Reekie Potato Equipment. “That way, there’s no haulm in the wheelings to get caught on the harvester’s front discs and no need for discing to incorporate the material before sowing the next crop.”

Scotts Potato Machinery aims for a similar effect with the latest-spec Trinity 22B two-row topper. “If we can improve the chopping performance and get it fine enough, haulm can be sieved out with the soil rather than being taken out by the extraction system,” says Derek Scott.

A shear plate is set across the machine with tight clearance to the flails, which are said to have a more pronounced curve to them, beneath a tight-fitting hood.

“It works best without a centre share on the harvester because otherwise you’re taking a lot of material on to the webs,” Derek Scott concedes. “And it all rather depends on the variety involved; some produce a much bigger volume of haulm than others.”

A full-width deflector version of the fine-chopping machine shifts debris out of the harvester’s path. It was originally designed for topping daffodil bulbs, which have very light, difficult to clear tops, but has since shown promise in potatoes.

“It uses the same staggered flail and shear plate chopping system as our current machines but a vee-shaped baffle beneath an extended hood places the chopped material directly in front of the wheels,” explains Derek Scott. “The extended hood was conceived to get the lightweight bulb debris out of the suction effect of the flails but it also means we have a relatively gently shaped deflector that should handle reasonably quantities of chopped potato haulm and leave a clear finish for easier lifting.” 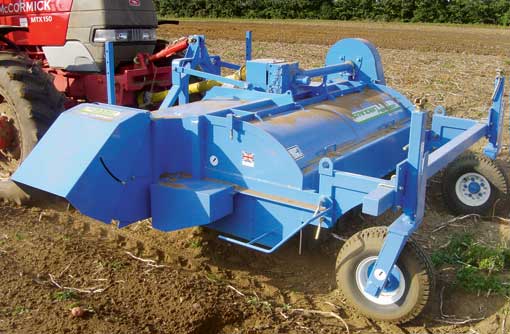 Standen Engineering’s FM-2 potato topper is available only with side discharge haulm conveyor. 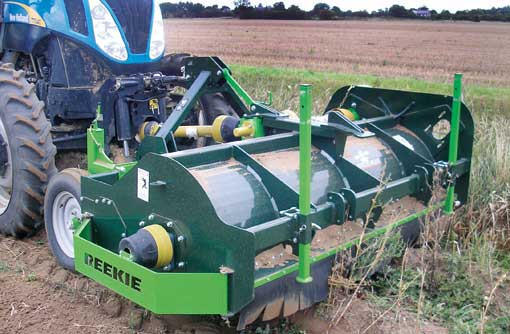 Reekie RHT 2200 aims to chop fine enough to leave material on top of ridges and across beds so it can be sieved out on the harvester webs. 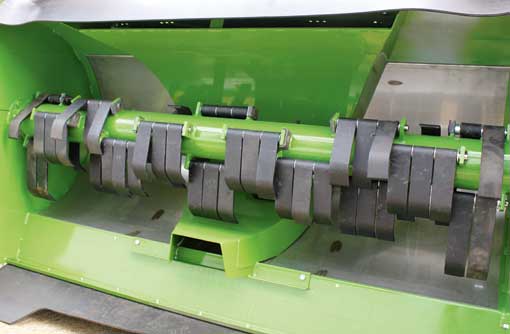 Six-row toppers like this Baselier GLKB 550id combination are becoming more popular now that larger tractors equipped with front linkage and pto are commonplace. Splitting the working width front and rear spreads weight; a rear-only half split machine is an alternative and folding is useful where frequent road travel is involved. On largely ring-fenced potato land, a rigid six-row topper with end-tow kit is a lower cost option. 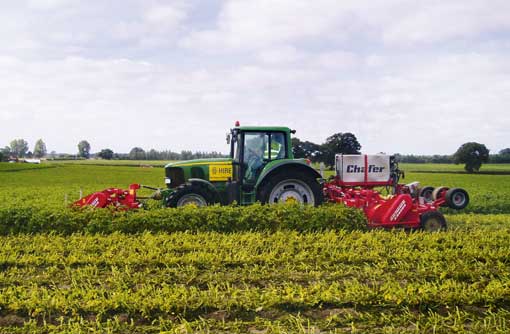 Grimme’s six-row KS 600 front/rear combination can be equipped with the Chafer ‘flail and spray’ outfit.