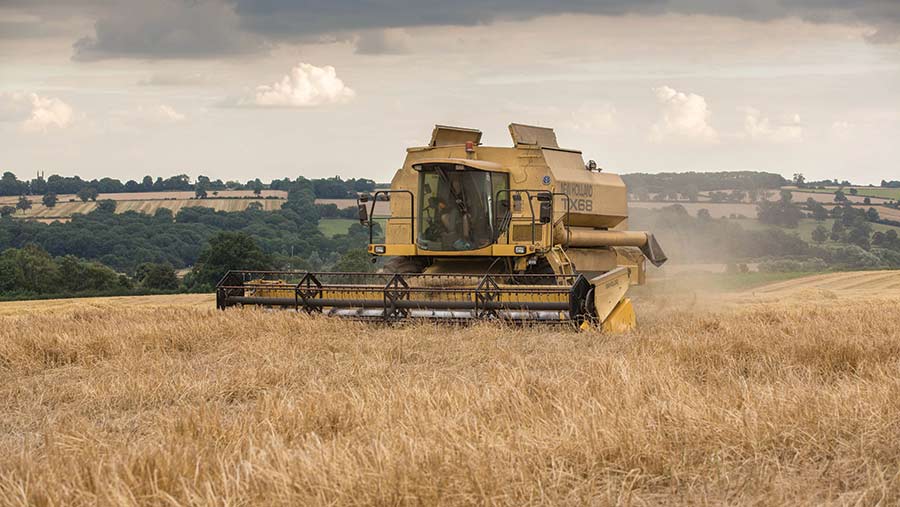 Higher seed rates and nitrogen fertiliser applications have pushed up yields for a group of Hampshire spring barley growers – without compromising malting quality.

The 12-strong group grows over 4,000ha of the spring crop and are keen to deliver 9t/ha-plus yields, backed up by advice on what type of nitrogen and plant growth regulators to use.

“As experienced growers, most of us are disappointed if we don’t bring in comfortably over 7.5 t/ha these days. And we know we can get more than 9t/ha from some crops,” says group member Dick Hall from Corehampton to the south-east of Winchester.

See also: New cereal and OSR varieties could be cheaper to grow

What was needed, the group agreed, was science-based agronomy to deliver consistently at these levels on traditional malting barley-producing Hampshire downland.

“While we’re all achieving good yields from our crops by most standards, we’re keen to keep raising the bar,” adds Nick Rowsell from Stoke Charity on the other side of Winchester.

Spring barley is becoming much more important to the group as it comes under growing financial pressure, as well as facing weed and disease-control issues.

The group came together two years ago, working with agronomists Mark Glover and Peter Gould of the distribution and agronomy group Agrii.

The growers said it was clear there was not enough good science on agronomy to support the sort of performance they knew to be possible with modern varieties.

“Although we all wanted the same thing, it was also obvious we were working on very different recipes – with sowing rates ranging from 250 to 450 seeds/sq m, nitrogen applications from 110 to 190kg/ha and a variety of plant growth regulator regimes,” says Mr Rowsell.

So the group went back to basics, defining the productive heads/sq m, grains/ear and thousand grain weights required to deliver 9t/ha-plus yields and the agronomic essentials to drive these components.

The Agrii western research and development team took up the challenge, designing and establishing a series of trials on agronomic inputs at its Marlborough site.

It was rapidly agreed that both seed rates and nitrogen applications needed to be higher than most members were using and any initial nitrogen should be placed in the seedbed rather than after sowing.

Another member of the group, David Miller of Wheatsheaf Farming Company near Basingstoke, says this integrated growing systems research was just what was needed.

“The first year’s work showed the importance of well-placed seedbed nitrogen, the value of protected urea over ammonium nitrate and the opportunities for increasing total nitrogen levels without exceeding malting specifications,” he says.

“As a result, we’re stepping up the 140kg nitrogen/ha rate we’ve been using at Wheatsheaf for almost as long as I can remember, applying a good amount of nitrogen alongside the seed with our cross-slot drill, rather than continuing to spread it after drilling,” adds Mr Miller.

He is also looking to switch from ammonium nitrate to a protected or treated urea product origin enhanced nitrogen (OEN).

“Alongside cover cropping to capture nutrients and improve soil structure as part of our developing no-till regime, this should allow us to push on from the record 8.1 t/ha we averaged with our spring barley last season,” he says.

Mr Hall says that growing half his spring barley for seed, he had pushed nitrogen applications up to 180 kg/ha in many cases in the past. Then two years with many crops on the floor led him to pull back to no more than 145 kg/ha.

“Our group discussions and trials have, however, given us the confidence to raise our sights again, with better nitrogen timing and a good early application of chlormequat on modern varieties like Planet and Irina, both of which gave us 9t/ha last season,” he says.

Mr Rowell has upped his seed rates from 270-300 seeds/sq m to 385-400 seeds/sq m and has also switched to incorporating nitrogen in his seedbeds, rather than spreading it on the surface, and moved away from religiously applying 130 kg/ha of total nitrogen.

“With 140kg nitrogen/ha, our 140ha of Odyssey averaged 8.8t/ha last season, with almost every load coming in below the 1.65% nitrogen specification for UK malting,” he says.

In addition, all his 160ha of Irina came in under the 1.8% nitrogen maximum needed for export and gave an average yield of 9.2t/ha.

“With this experience, we’re increasing our standard nitrogen applications to 150kg/ha in the coming season, with 50kg/ha in the seedbed, 70kg/ha by GS13 and 30kg/ha later,” says Mr Rowsell.

He is also looking to incorporate protected phosphate in the seedbed and employ variable seed rates, and may add foliar phosphite to his early PGR to boost rooting.

With all this ongoing work, the three growers are looking to reduce their cropping risk and produce consistent crops at the least possible production costs a tonne.

“Spring barley has been by far our most consistent margin earner over the past six years. Even so, it’s crucial we guard against the bad growing years we know we can have with the crop,” says Mr Miller.

“When we have a bad spring barley growing year we don’t want to be having a bad crop of spring barley,” adds Mr Rowsell.

“As we move into our third year of group discussions and trials with Agrii, the extra intelligence and confidence we’re gaining from them is allowing us to develop just the sort of resilient, high margin-earning spring barley growing recipe we need,” concludes Mr Hall.