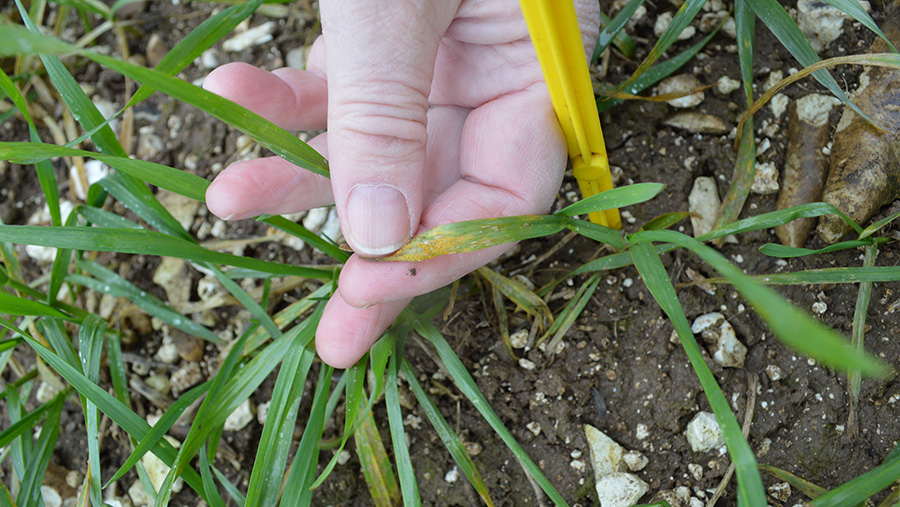 Yellow rust disease is appearing in winter wheat crops on the Hampshire Downs with the occasional spot of brown rust threatening crop yields after a mild and wet winter.

Iain Hamilton, field technical manager with agrochemical giant Syngenta, says septoria is also widespread on the lower leaves at the group’s trials on Chilbolton Down Farm, near Stockbridge.

He is advising growers to prepare for T0 fungicides, often applied in March, as independent trials at Adas Rosemaund in Herefordshire showed a yield advantage of 0.36t/ha from a T0 spray in 2015.

“The T0 spray pays for itself and is also an insurance against a later T1 spray being delayed,” he tells Farmers Weekly.

Mr Hamilton is advising using an azole-chlorothalonil fungicide approach at T0 if rust is active and there is a high risk of septoria.

On lower risk disease sites, a strobilurin-chlorothalonil could be an alternative, which might be a fraction cheaper, have action against take-all and could limit resistance to fungicides building up by reducing the number of azole sprays.

Yellow rust is encouraged by mild and damp weather, while brown rust is favoured by warmer and drier conditions and often comes into crops later in the season.