An autonomous combine harvester has started harvesting the world’s first hectare of grain grown from start to finish by robots.

The combine, which is guided by the mapping system used in drones, will take five hours to harvest the Hands Free Hectare in total, but is so far being hampered by rain.

The £200,000 Innovation UK-funded project by Harper Adams University with Precision Decisions has modified existing machinery to drill, sow, spray and harvest the crop without any human control.

As no human is allowed to set foot in the fenced-off crop, the team used a drone adapted with a robotic grabber fitted with metal teeth to collect a sample for agronomist Kieran Walsh, before combining could begin.

The team is hoping to send the barley for malting in order to produce a Hands Free Hectare beer.

Looking ahead, Harper Adams project leader Kit Franklin said the team is hoping to secure a smaller amount of funding to continue the project by planting a winter crop in the field.

“We are currently trying to secure the funding, but we need considerably less going forward,” he said.

“We want the project to continue as it is now, to drill again with improvements. We have changed some hardware so it would be much straighter second time round.

“Beyond that, as a consortium we are discussing bigger ongoing projects off the back of the Hands Free Hectare project,” he said. 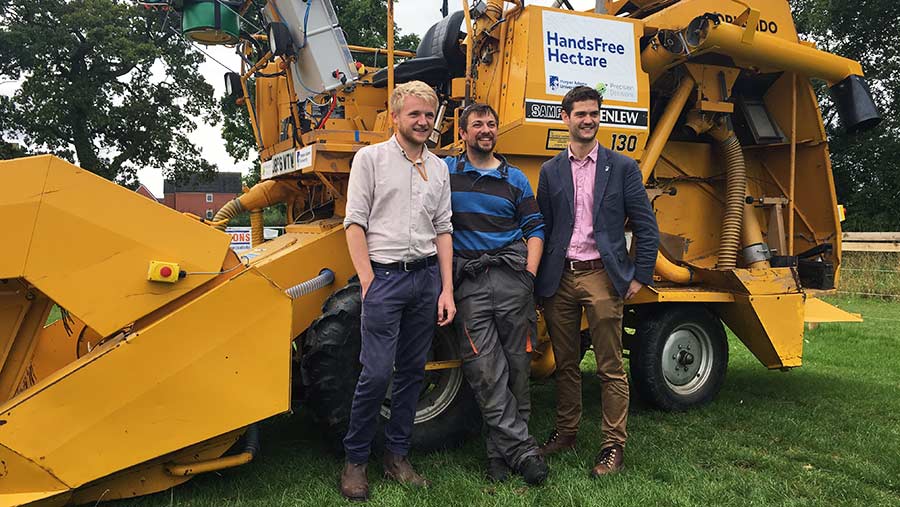 “We are looking to grow and commercialise some elements, and maybe run a hands-free farm with multiple fields and crops in a couple of years’ time.

“That’s very early doors. For now we want to roll it again the same, then do it bigger and better.”

Mr Franklin said commercialisation of elements of the technology is within reach of manufacturers, with investment needed to just prove ruggedness and robustness for the market.

The adaptations made by the team to the combine and tractor to make them autonomous have cost just £10,000 each by using open-source technology developed by hobby communities.

He said the project has proved just how cheap autonomy can be, and machinery could easily be on farm for £40,000.

Watch the whole of our harvest in under a minute and a half! #timelapse #HFHa #ClubHectare #harvest17 #harvest2017 pic.twitter.com/EsfI4jubyx