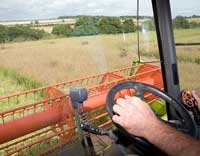 Oilseed rape has been the surprise of the year, yielding above average despite appalling growing conditions.

The very hard winter did help to lower disease levels, with delayed stem extension and heavy leaf loss curbing stem canker and light leaf spot. “But then we had a protracted spring and a whole series of sharp, late frosts, which quite clearly affected crops.”

Although much was made of pod loss in DK Cabernet, other varieties were just as badly affected, he said. “The Castille plots at the Cereals Event were horrible, it’s just that everyone else was looking at the Cabernet.”

Prolonged drought between Easter and harvest should have caused further damage to crops, but most had performed extremely well.

“If they established well, they yielded well. Rape needs a loose topsoil to root into – it really doesn’t like some of the compacted seed-beds you get from minimum tillage. Subsoiling it in does enable the plant to root down quickly and to considerable depth.”

Topping the table in the east and west was candidate conventional variety Sesame, with a score of 106 against the control of 100. In its third year of trials, its rolling average was 110 – three points ahead of the next conventional variety, DK Cabernet. Splitting the two was the hybrid PR46W21 with a rolling score of 109.

“I haven’t been a big promoter of hybrids, but I am really struck by W21 – it has been far more consistently at the top of the yield range than any other conventional or hybrid variety,” said Mr Kightley. “Because of its consistency it is a hybrid that people should certainly be trying now.

“But, if reports that it has sold out are true, then new hybrids Rhino, Compass, Palace and Primus are worth considering, as is Excalibur, with its excellent spring vigour which helps it recover from pigeon grazing.

“Both W21 and Cabernet have proven themselves – they set the standard for the recommended list. With Sesame still doing well in its third year of trials, this is really good news for farmers. These new varieties are coming forward and pushing the yield standard up.”

Drought in the spring caused considerable damage to pea and bean crops, with yields down across the board, and spring beans looking particularly poor.

At the time of writing (27 August) only 10% of winter and spring beans had been harvested, with 50-60% of peas cut, said Salvador Potter, chief executive of the Processors and Growers Research Organisation (PGRO).

“Yields are all over the place. Winter beans have not yielded as well as the past two years, but have done reasonably well. But spring beans are very susceptible to drought, and it did hammer them.” With so little cut and such wide variability in yields it was too early to give an accurate figure, but Mr Potter reckoned peas had averaged about 3.5-4t/ha (1.4-1.6t/acre) and beans 4t/ha (1.6t/acre).

“The west and south-east have suffered more than the north and east of the country in terms of the drought and heavy rain at harvest – they are going to be the worst affected areas.” Vining peas had proven particularly variable, with East Anglia hit the worst, he added.

“The rain has affected the quality of the peas – there are some bleaching problems. But they stood reasonably well for harvest, apart from the later crops.” The biggest quality issue for beans was Bruchid Beetle damage. “It has been very high – with up to 50% infestation in some cases. The warm and dry spring was very favourable for the beetles, and export quality is going to be challenging this year as a result.