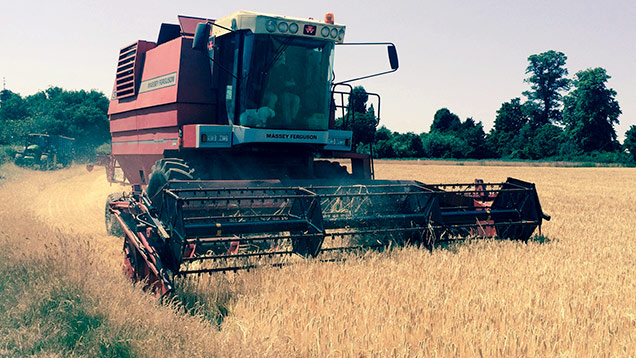 Harvest 2015 is under way, with combines rolling into barley crops on farms in East Anglia and the south of England.

The total area of cereals and oilseeds for harvest 2015 in Great Britain is estimated at 3.72m hectares – down 2% from 2014, according to the Agriculture & Horticulture Development Board.

“It’s all we had ready and it wasn’t brilliant – it is on light land, it has been a dry spring and it had droughted off,” Mr Turner told Farmers Weekly.

“The sort of land we have comes really early and the combine said it was yielding about 6t/ha, but we haven’t had the analysis back yet.”

Mr Turner said he expected to help a neighbouring farmer start his barley on Friday (10 July).

While the area of wheat and oilseeds have both declined, according to AHDB Cereals the total barley area likely to be harvested this summer is 51,000ha higher than 2014.

In Berkshire, Colin Rayner said Cassia barley was coming off the field at 13-14% moisture and yielding about 8t/ha at Berkyn Manor Farm, Horton, near Slough.

“The yield is down because the grain is pinched due to drought,” said Mr Rayner. “We haven’t had a good lot of rain here since the second week of May.

“It would have been a fantastic crop if the grain had filled. We have sold some of it straight off the combine for £107/t. We are loading lorries now.”

Regionally, the biggest increases for spring barley have been seen in East Anglia, the East Midlands and south-east England, said AHDB Cereals.

The increase is likely to have been driven by efforts to control blackgrass, as farmers increase the amount of spring cropping in a bid to combat the weed.

“Changes are likely to be in response to developing economic and agronomic trends.”