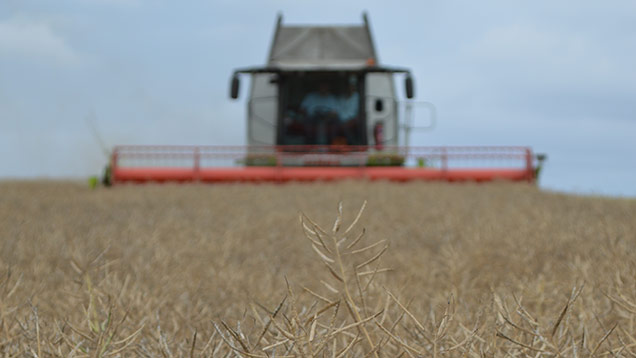 Combines are rolling across most of the country with some areas well behind normal harvest dates compensated for by some big yielding crops.

Adas reported half the UK winter barley was cut by 4 August with average yields about 10% higher at 7.1-7.3t/ha compared with a 10-year average, and 35% of the oilseed rape was cut with yields up nearly 6%.

Yields are in excess of anticipated levels in Cambridgeshire, according to Rob Munro of Fengrain with the quality of wheat generally good.

He says some first wheats have been yielding above 13t/ha and second wheats have done about 10-11t/ha but this varies with geography.

Winter barley has done phenomenally, with Mr Munro saying it looked to be the crop of the year before wheats started arriving.

“It has not been uncommon to get 10t/ha and farmers seem very happy with yields,” he says.

Winter barley has all been cut on the farm with the quality generally good.

“Yields have been on or above average at around 8-9t/ha for Maris Otter, Flagon, Venture and Tower. So far so good and the weather has been nice and dry,” he adds.

Over in Herefordshire, the weather has hampered the progress of harvest according to Dale Payne, store manager at Craven Grain.

“Combining has been very late to start this year and we have only had about 10% of what we are due to get in so far,” he says.

There have been some issues with the size of the oilseed rape seeds which have been coming in very small.

“It has caused difficulties with combining and drying as the seeds are so small they go out the other end. Oils have come back 42-46% but mostly at 43%, down to the small seed size,” he says.

Winter barley has come in with specific weights of 70kg/hl and the wheat is another week away. Growers are fairly pleased with the yields but frustrated with the stop start weather, adds Mr Payne.

Further north in Shropshire, Richard Solari has harvested a bumper winter barley crop with one field of the variety Cassia yielding 11.83t/ha at 15% moisture at Heath House Farm, Beckbury, near Shifnal.

“This is the first field we have moved to a nine-year rotation which includes two years of grass and also peas in the rotation,” says Mr Solari.

Harvest is yet to start in earnest in Scotland with crops around two weeks behind normal, according to Trevor Harriman of Scotgrain.

“There has been a minor amount of feed barley in so far. We are expecting winter barley to start coming in around mid-August and spring barley to start at the end of August to well into September,” he says.

Oilseed rape is expected mid to late August and wheat by late August.

“It has been wet but not too wet, so none of the crops have been damaged, just delayed,” adds Mr Harriman.

“There are some fears that the cool spring weather could comprise the potential of spring crops as it delayed sowings,” he says.