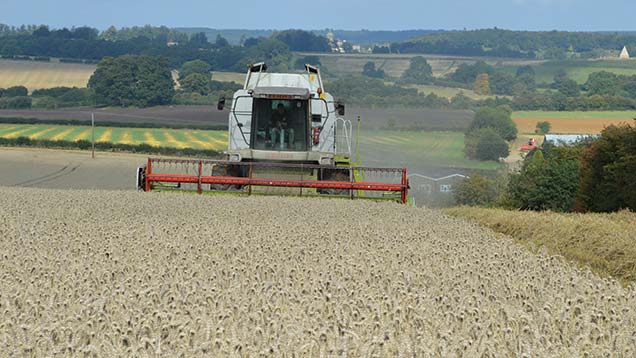 Brighter weather allowed growers in Scotland to make up for lost time at the weekend, with the grain harvest surging towards the finish line.

Andrew Ainslie, Frontier’s general manager for Scotland, tells Farmers Weekly he saw a significant shift across the country at the end of last week and into the weekend.

“It was very wet again on Monday, but we did have a good weekend, particularly in Aberdeenshire and Kinross, where fantastic weather saw progress made at the end of last week and on Saturday,” he says.

Winter wheat yields have been good across most areas, although there is an issue with skinning in the malting barley.

Spring barley harvest progress remains variable across Scotland, with some growers finished while others have only just started.

“Generally speaking though the quality is high and yields make up for poorer prices, to some extent,” he adds.

Ian Keith, Frontier barley trader for Scotland, says spring barley crops in central and southern areas of the country were about 85% complete, while progress further north was about 60% done.

“Quality is good generally because a lot of these crops are only just maturing now, so it is a case of waiting for them to be ready to combine,” he says.

Harvest was about two weeks late for Malcolm and Rodney Foster, farming some 200ha in North Yorkshire, with the last of their wheat only cut on Sunday (20 September).

The final 8ha of Santiago was yielding almost 10t/ha, with moisture levels dropping to 16-17% at Grange Farm, Bulmer, some 10 miles north-east of York.

“We are pleased with the yield, as we are normally finished by the first week of September,” Malcolm tells Farmers Weekly.

They grow 100ha of winter wheat, barley and maize on their light loam soil, with all cereal straw baled for their 200-strong dairy herd.

Grain traders are pencilling in a 16m tonne wheat crop, with higher yields helping to offset the slightly lower crop area this season.

“Yields are generally good and quality is holding up quite well despite the delay in harvest,” says Jonathan Lane, trading manager at Gleadell.

He expects average wheat yields to be about 8.7t/ha, some 1.5% higher than last year.