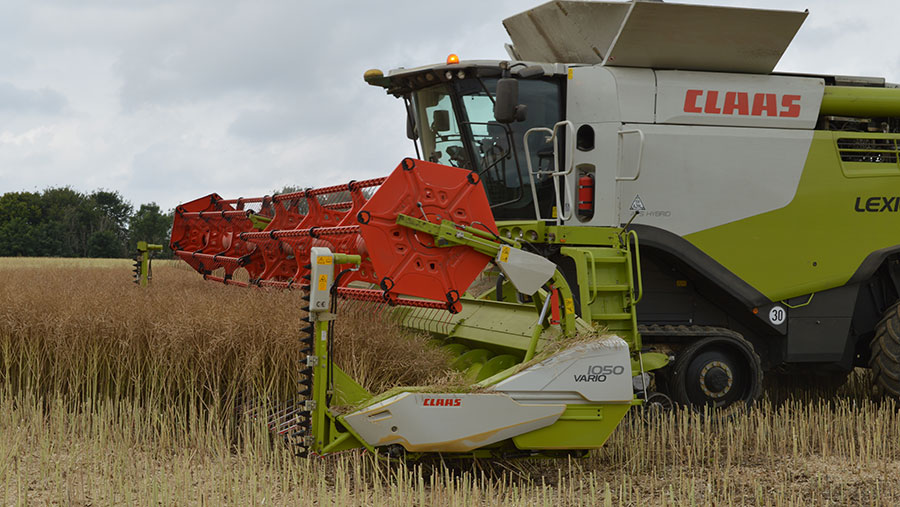 Combines are making strides in northern England and Scotland cutting winter barley and oilseed rape, although rain is causing frustration across the country.

In Perthshire, some 75-80% of winter barley has been harvested – albeit of a very small crop, said Robin Barron, general manager at East of Scotland Farmers.

“We’re expecting around 5,000t this year, and anecdotal evidence suggests yields are average. Some of the malting barley looks particularly good with reports of over 7.4t/ha – though this is yet to be confirmed,” he added.

“Here, the vast majority of farmers are centred around their spring barley crops. We expect harvesting to begin in a few weeks,” he added.

In the area from Yorkshire to the Scottish Border, the first “real” day of harvest occurred on 31 July after some heavy rain, said Gary Bright, managing director at Grainco.

“Though the official harvest began two weeks ago, rain halted cutting – it’s now all go, with farmers focusing on getting crops in quickly,” he added.

Prior to harvest, farmers were nervous about yields, however, winter barley growers had been pleasantly surprised.

“In general, there appears to be no problems. Specific weights have averaged between 63kg and 70kg/hl and, despite the rain, crops are very ripe and drying quickly – coming in at about 14% to 16% moisture – everyone seems quite pleased,” he said.

Looking ahead, growers were also optimistic about the winter wheat harvest, with many expecting to cut within the next two weeks.

“About 90% of oilseed rape and winter barley is now in, with yields averaging 4t/ha and 9t/ha, respectively. Quality is looking much better than last year,” he said.

The store had seen 10% of the expected winter wheat tonnage and quality was looking encouraging. However, the recent wet weather was likely to have a detrimental effect on grain coming forward.

“Growers are very worried about losing the Hagberg on milling wheat. Crops are ripe so are very vulnerable to the weather,” said Mr Darke.

Drawing to a close

In south-west England, it was a similar picture, with much of the oilseed rape and winter barley harvest drawing to a close across Cornwall, Devon and Somerset.

“So far, the Cannington Store has seen about 4,000t of oilseed rape and 2,500t of winter barley,” said Ian Eastwood, marketing manager at West Country Grain.

“Oilseed yield and quality is up on last year with averages of about 3.7t/ha and 45% oil content. Barley is looking much more average with nothing fancy in terms of yield and specific weights between 58kg and 70kg/hl.”

Across the sea into Northern Ireland, heavy rain had paused activity at for John Best at Acton House Farm, Poyntzpass, County Armagh.

“We’ve cut about 48.5ha of oilseed rape so far, with a further 40ha of rapeseed fit to cut, but the rain has held us off. We are, however, cutting earlier than last year and the yields are better – at about 4.7t/ha,” said Mr Best.