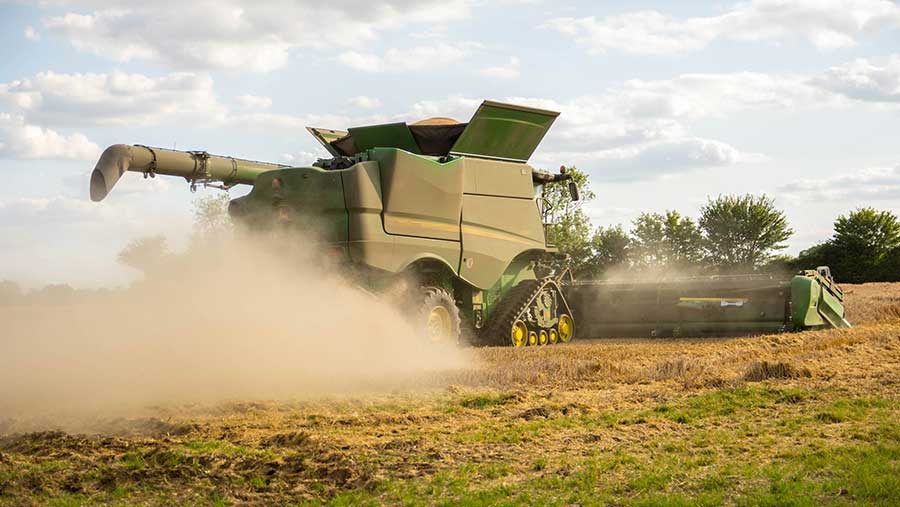 Rain showers continue to hamper harvest progress, creating a frustrating stop-start situation for many farms, with dry weather over the weekend looking set to give way to another showery week.

In spite of combines beginning to roll 10 days ahead of average in many areas, growers are now cutting at similar dates to last year.

This means many have large areas of ripe crops ahead of them, with spring cereals vying for attention alongside remaining winter crops.

And as crops sustain more showers it will be an anxious time for many as they wait for samples to be analysed to reveal whether or not they have hit valuable premiums for milling and malting.

In Wiltshire, crops have ripened early, with much of the wheat needing to be cut over the next few days, according to David Butler at East Wicks Farm near Marlborough.

He said the weather has caused some damage to crops, reducing quality, but yields were still pretty good.

“The early Crusoe wheat lost Hagberg and I will find out soon if the spring barley has made malting,” he explained.

In Shropshire, Duncan Whiteman has found harvest frustrating at Arlescott Farm, Telford, with rain showers limiting him to cutting only 53ha so far.

His Mascani oats achieved 8t/ha, coming in dry with a reasonable bushel weight, and he has also cut some Evolution and Graham wheat, both at 16% moisture, with specific weights of 75-76kg/hl.

“It was a nice clean sample and it was my first year of implementing a no-till system – it was scary but I am happy,” said Mr Whiteman.

“The wheat yielded 8t/ha, which is as good as if I had ploughed and combination drilled it.”

However, there is still 91ha out of 466ha of winter barley left to cut after his efforts to keep wheels turning have been hampered by the showers.

“It is a fairly stop-start affair. We had nice weather two weeks ago but since applying glyphosate we have missed three or four days of combining due to the weather.”

The barley yields are not as pleasing as Mr Gloag had hoped, averaging 9.1t/ha, with fields ranging from 8.3t/ha to 10.4t/ha. “Both were Volume, with the same husbandry, but there was a colossal difference in yield.”

In Northumberland, Rod Smith has come to a bit of a standstill at Beal Farm, Berwick-upon-Tweed.

Mr Smith is expecting a very stop-start few weeks, with 162ha of wheat and 102ha of spring barley to cut.

His spring barley is still a few weeks off being ready, but he wants to get his second wheat cut before moving into his seed crops.

Further north, harvest had not gone too badly for Scott Campbell at Kirkton Farm, Kinellar, Aberdeen.

“Winter barley had fantastic yields, but was on the lower side in terms of bushel weight.”

The hybrid barley came off the field at 11.1t/ha, while the conventional barley averaged around 9.9t/ha, with moisture anywhere from 17% to 22%.

Mr Campbell had also finished his Mentor oilseed rape, which achieved 4.3t/ha, with moisture content ranging from 10% to 18%.

Next, he planned on getting into some Reflection second wheat and Monroe first wheat. “The Reflection is looking good but the Monroe looks even better,” he said.