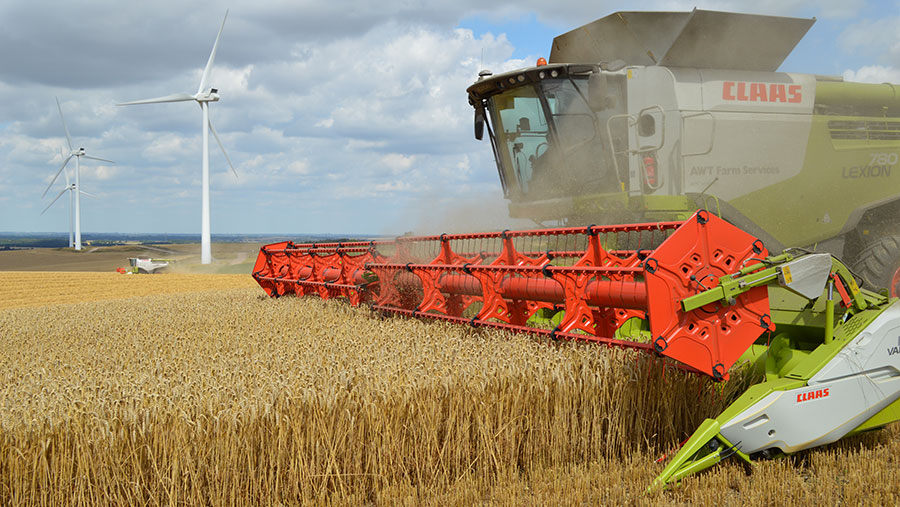 Winter wheat harvesting is kicking off in Cambridgeshire this week with grain quality looking good although very hot weather in June has trimmed yields.

Very early milling wheat crops were showing good protein and specific weights levels as the combines rolled across some light land in the county.

David White, farming between Cambridge and Newmarket on some sandy land, cut 14ha of the old milling wheat variety Solstice on Monday 17 July and reports protein levels of over 13% and a specific weight of 77-78kg/hl.

Yields were coming in at 8t/ha compared with the 9t/ha he would usually expect, and this lower yield was largely due to the very hot spell of weather in June.

“Quality is good, but there is not as much grain as we would have liked,” he told Farmers Weekly.

He moved into 8ha of the milling variety Crusoe on Monday night (17 July) with similar yields and quality to the Solstice.

He has 40-45ha of winter wheat to cut in total, and his remaining crop is on some fenland which will be later to mature.

Traditional milling wheat minimum industry standards are for protein of 13%, specific weight of 76kg/hl and a Hagberg level of 250.

On the other side of Cambridge, James Peck near Dry Drayton started cutting winter wheat for a neighbour on Monday (17 July), and is hoping to move into his own wheat on Thursday (20 July).

Down in Kent, James Loder-Symonds is set to start cutting his milling wheat Skyfall today, some two weeks earlier than normal, at a time he would normally be starting cutting oilseed rape.

He is moving into 70ha of second wheats at Nonington Farms between Canterbury and Dover on the edge of the North Downs after cutting 300ha of oilseed rape earlier this month.

Throughout harvest. we will aim to use as many of your photos in the magazine and online as possible.