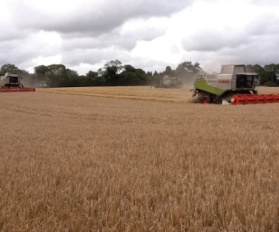 Martin Bridges is busy on the last week of harvest at Moray Estates, Elgin, Morayshire, and has seen a mixed year of yields.

“The harvest’s been okay for us, but the yields haven’t been that exciting,” he said.

Volume and Bamboo winter barley yielded 6.9t/ha, which was about average for the farm. “It’s not too bad, although bushel weights were not as good as normal and the sample wasn’t as bold.”

Concerto, Optic and Propino spring barley was less pleasing, struggling to reach 4.9t/ha, and with a poor amount of straw too.

“Usually we’d expect 5.6t/ha, so it’s been quite disappointing,” said Mr Bridges. “It suffered heavily from sand storms after it was drilled and then it burnt off in the fine weather.”

The Expower and Artoga oilseed rape yielded slightly better than average, at 3.7t/ha.

“Some of it’s been good although some was quite ordinary,” he said.

“On the lighter ground the crops have suffered a bit where the hot summer has burnt some patches. The heavier ground did well, and the oilseed rape kept standing until harvest.”

The winter wheat was much better, with the best of the crop yielding 8.6t/ha.

“We budget for 7.4t/ha so we’re fairly happy, although as an overall average we’ve probably hit our targets and that’s about it,” said Mr Bridges.

“It’s been an average year for us, but not a complete disaster. The weather’s been good, yet quite windy which has really helped to push things along. Fingers crossed, we’ll have finished by the end of this week (w/e 6 September).”