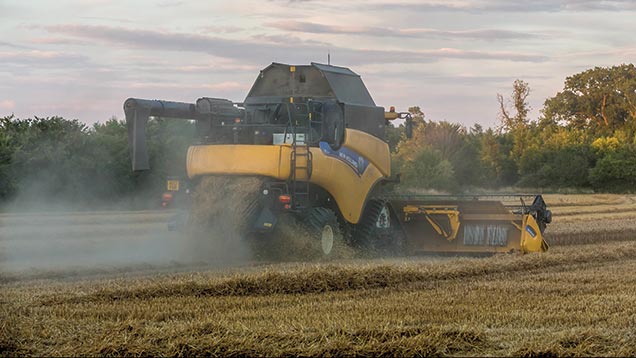 This week’s dry spell will come as a welcome relief for many growers struggling with a badly delayed harvest, which has for some become a rescue mission.

While yields remain good, quality is the key concern with crops being downgraded to feed because of sprouting and fusarium problems.

All crops are a bit later than usual, according to James Clark, farm trader at Grainco, Tyne and Wear, Newcastle upon Tyne.

“Around 50% of the wheat is left to come in and this is likely to be higher further north,” says Mr Clark.

Wheat yields have been good so far with plenty of crops yielding 12t/ha and a few at 14t/ha. “Conditions have really suited yields this year,” says Mr Clark.

One farmer with plenty still to cut is Carl Tuer at Rock Farms, Alnwick, Northumberland.

“Scout and Leeds wheats have both yielded 11.36t/ha and there is still some Invicta, which looks very promising, some Panacea and more Leeds left to cut.”

Good yields are also being seen north of the border for Charlie Stewart at Merton Estates, St Boswells, Kelso.

Horatio has yielded very well, so too Viscount and Leeds. Moistures have been coming in just under 20% for Leeds, but the earlier cuts were down to 15%. Mr Stewart still has spring oats left to cut.

In Herefordshire, the wet August weather has taken its toll on Steve Klenk’s crops at Garnstone Farm, Ledgemoor.

“What we have already cut has yielded well, but specific weights are starting to go down. The wheat is holding on remarkably well, with very little disease, but some of my seed crop is now going for feed.”

Mr Klenk has grown Grafton, Reflection, Santiago and Belepi. “The Grafton has probably yielded 11t/ha and one lot of Reflection achieved 12.5t/ha. We have not cut the Belepi but that looks very well so we are just hoping for dry weather this week,” says Mr Klenk.

Advance, Incentive and Marble oilseed rape crops yielded very well, pushing 5t/ha with good oil content. “It has been a bit stop-start but I am very pleased,” adds Mr Klenk.

Harvest is three weeks behind normal for Russell Fraser at Tiln Farms, Retford, Nottinghamshire, but steady progress is being made now the weather has improved, with 46ha of spring barley left.

Mr Fraser grew Gallant wheat and yields are up by 1.2t/ha with bushel weights of 79-86kg/hl.

Harvest is almost complete in Dorset for Nick Harding at Preston Farm, Tarrant Rushton, with around 10% left to combine. “We are in the spring wheat at the moment and there are 36ha of winter wheat left but things have gone all right so far.”

Some of the moisture contents have been a bit high, with Mr Harding having to dry some crops, but overall he believes it has generally been a good harvest. “The quality has been fine for everything with winter wheat yielding very well indeed. I am really pretty happy.”