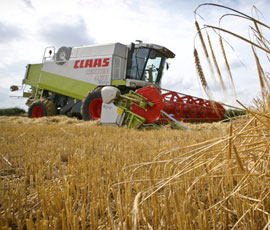 Harvest is making swift progress, with the dry weather enabling many farmers to finish combining and move onto autumn fieldwork.

In Hereford, Jamie Rogers had got just two days’ combining left to do at White Hall Farm, Hampton Bishop.

“We’ve finished the winter wheat and spring rape, and started spring barley today (2 September),” he said. “The spring wheat isn’t quite ready, but will be by the time we get to it.”

First wheats had yielded close to the five-year average, at 10t/ha – but second wheats that were drilled late into poor conditions were not as good, he added.

Across in Lincolnshire, Jim Beeden had made rapid progress with harvest at Hackthorn Farms, Welton, with everything now cut bar Fuego spring beans.

“We’ve started the beans, and so far they’re yielding 4.25t/ha – but by tonight we’ll have cut everything that’s fit,” he said.

Further north, Michael Manners had finished harvest at Conicliffe Grange, Staindrop, Darlington, and was pretty pleased with his yields.

“Considering how bad it looked earlier on, we’re really quite happy,” he said. “It’s been a pain swapping from wheat to oilseed rape and back all the time, but with the decent weather, harvest has really been pretty easy.”

In Scotland, Sandy Norrie was having an excellent harvest at A J Duncan’s Muirden Farm, Turriff, Aberdeenshire, having cut more than three-quarters of the combinable crops.

Above-average yields across the board, combined with decent harvesting weather, were making this year an absolute pleasure, he said.