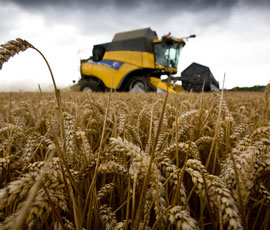 Harvest 2013 is emerging to be one of contrasts, with some diabolical yields and others that have been a very pleasant surprise.

In Dundee, Ian Moncrieff was making good progress with the winter barley harvest at Berry Hill Farm, and was pleased with slightly better than average yields.

Wheat and oilseed rape also looked very well. “I think that winter barley will definitely be the worst crop here.”

At the opposite end of the UK, Jonathan Tipples had had a terrible harvest at Reed Court Farm, Marden, Kent, with wheat and rapeseed yielding as badly as expected.

“The oilseed rape looked terrible all year, and even if you take out the bits that we abandoned, it’s still only done 2.5t/ha,” he said. “It’s been terribly patchy – the pigeons wouldn’t leave it alone.”

Second wheat Panorama hadn’t done much better. “We mauled it into terrible seedbeds in the autumn, and probably shouldn’t have done it – it’s been pretty shocking.”

“The winter barley is on wet ground and just sat in water over the winter,” he said. “As a result, it’s only yielded 5.6t/ha.”

Propino spring barley had yielded a reasonable 6.2t/ha, but oilseed rape was very mixed. “I’m amazed by how it’s changed since the spring, but even so, if it averages 2.5t/ha we’ll be happy.”

Down the road near Redhill, Bristol, Daniel Harding had just started combining oilseed rape before being almost immediately rained off.

So far he had cut 38ha of winter barley and 240ha of spring barley, which all yielded around the 7.4t/ha mark.

“I was hoping for a bit more than that off the winter barley, but it was just saturated over the winter.”

As a result, he had drilled a lot more spring barley, with maize also sown on the arable unit.

“It’s really messed up our cropping plans – our rotations are completely out of sync and will take a good two years to get back again.”

In Lincolnshire, Mark Tinsley had cut just over 40ha of Cordiale for seed at Hurn Hall Farm, Holbeach, and was happy with the results.

“It’s yielding about 10t/ha according to the combine – I think it should be a good average yield, with good specific weight,” he said.

However, the remaining two-thirds of the wheat was not quite fit, so combining was now on hold for a few days.

“A break of two or three days’ rain won’t worry us – I don’t think I’ve ever said that before during harvest.”