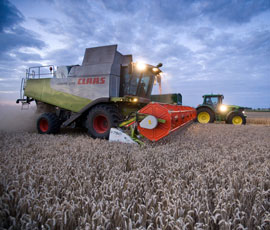 Combining continues to keep pace with crop fitness, with many drivers taking an enforced break between fields, even without accounting for rain showers.

According to the latest ADAS report, farmers cut just over 300,000ha between 7 and 13 August, bringing the total area cut to 13% of the GB combinable crop area.

By Tuesday, less than 5% of the total wheat had been cut, with the Eastern region most ahead, at 9% harvested.

“Most of the early harvested crops were early maturing varieties such as Grafton, Gallant and Cordiale,” said the report. “Early yields are close to farm average, and range from 5.5t to 12.4t/ha.”

Oilseed rape yields at Model Farm, Hanchurch, Staffordshire, had been good, even though Stephen Sant only started combining it yesterday (14 August).

“We cut 16ha of Excalibur and it averaged 4.2t/ha, dry over a weighbridge,” he said.

“We drilled it early in September with a power harrow drill – quite a lot of rapeseed in the area went in with a subsoiler drill and it was a complete disaster.”

James Hinchliffe was also delighted with his oilseed rape and wheat yields at Bank House Farm, Goole, Yorkshire, although the worst was yet to come.

So far 32ha of PT211 rapeseed had averaged over 5t/ha, with one field, drilled on 24 August, doing 5.56t/ha, and another with some pigeon damage touching 5t/ha.

In Devon, harvesting near Exeter was delayed today following a spell of wet weather, but after last year contractor Troy Stuart was not complaining.

“We’ve made a bit of progress – we started two weeks later than usual and are about 200ha behind where we should be, having cut 243ha so far,” he said.

With no winter barley to cut, Mr Stuart had combined a mixture of oilseed rape, wheat, spring barley and oats, with variable results.

To get a clear picture of crop yields and production across England, the NFU was urging members to take part in its 2013 harvest survey, which was now available online.

With the extreme weather affecting plantings and yields across the country, chief arable adviser Guy Gagen said that gathering information from growers would be a vital part of producing accurate crop estimates this year.