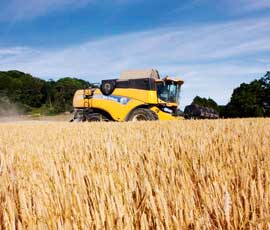 Farmers are combining flat out across the country, before forecast rain tonight (23 August) stops play.

In Kent, Stuart Hills was making excellent progress at Swallow Mill Farm, Charing, and was delighted with yields following the wet winter.

Having finished his winter wheat, he was now moving into Claire, planted at the end of February.

The same variety, planted in mid-September in good conditions, averaged over 10t/ha. And Gallant, drilled after the rain in late October, managed 9.1t/ha.

“Considering the way it looked over the winter, I’m really pleased with that.”

“We started combining five days later than normal, on 5 August, and in just three days had cleared up 70ha – it was really easy,” he said.

Volume, Bamboo and Retriever averaged 8.9t/ha over a weighbridge, with a small field of Volume topping at 9.3t/ha and Retriever reaching 8.4t/ha.

“There wasn’t really a big spread between the varieties – the Bamboo was most consistent so we’ll drill that this back end.”

In Yorkshire, Caley Sackur was combining wheat today at Lodge Farm, Tibthorpe, and was pleased with above average yields.

“It’s going very well – the weather has opened up this week and we’ve cut about two-thirds of our wheat so far,” he said.

“After today we’ll just have 80ha of Santiago left to cut – with a bit of luck we might finish harvest in August.”

Harvest at Higher Melcombe Farm, Ansty, Dorset, was proving to be something of a head turner – and not just because of the yields.

Carol Besent runs the farm with her daughter Harriet – and her two other daughters, Georgina and Katie, were helping out over the summer.

“Katie does the combining, and the other two run the tractors and trailers,” she said. “There’s quite a troop of us, and my daughters are all blonde and gorgeous; we do get a few strange looks.

“We will probably start the wheat today or tomorrow – one field looks reasonable but the other one is dreadful – we just couldn’t get it drilled early enough.”

Across in Herefordshire, Philip Gorringe hadn’t cut a single blade of cereals at Lower Blakemere Farm, Blakemere, with nothing yet quite ripe.

“We’ve done 40ha of grass seed, and have one field left of that – then we’ve got a couple of blocks of wheat which are barely ripe,” he said.

A couple of extremely heavy fields were drilled with winter barley particularly late, and were barely headed, he added.

“They look very strange, and either we’ll be combining in November or will sell them as wholecrop.”