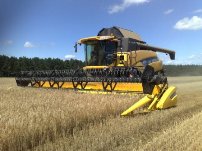 More settled weather has enabled most farmers to catch up with harvest, with many now into wheat across the country.

In Lincolnshire Chris Hewis recorded 130mm of rain in July but had now finished oilseed rape and winter barley, with mixed results.

“The rape was a good crop – we were really pleased. However, the winter barley struggled to make 2.5t/acre (6.2t/ha) – and at today’s prices that’s not very good.”

He waas hoping to start on Oakley winter wheat today (14 August). “The straw is still quite green, though, and it’s 17% moisture. I’d rather let the sun dry it, as we’ve got a promising forecast.”

Harvest was about halfway through at Bill Harbour’s Gosmere Farm, Sheldwich, Kent, where oilseed rape and peas were now finished.

The first wheats were yielding extremely well, but second wheats were proving disappointing, he said.

A new combine was helping Mike England to charge through harvest at Alby Farming, Norfolk.

He had finished winter barley and oilseed rape, and was well into the spring barley, which was yielding about 6.7t/ha (2.7t/acre).

A second-hand combine proved very exciting at Richard Brown’s Priors Farm, Newbury, Berkshire, yesterday, when it took off down a steep field at 30MPH.

“I was just waiting for the header to dig in, and do a loop-the-loop.” However, he was still thrilled with his purchase, and was busy combining spring barley today.

Harvest was progressing more smoothly at Duncan Whiteman’s Arlescott Farm, Telford, Shropshire, where he hoped to make a start on oats today.

“We’re up to date with everything so far. But last week was absolute chaos – we were making hay, and cutting rape and winter barley.”

In Yorkshire, Phil Dowson hoped to be into some Battalion winter wheat this afternoon. “It’s only just fit now – but if we had a week of sunshine we’d blaze through it.”

Nearly all the winter barley in the area was finished, and farmers were about 40% through their winter rapeseed, he said.