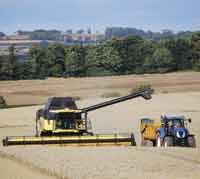 Dry spells over the weekend have enabled many farmers to get on combining, although progress continues to be frustrated by showers.

In Suffolk, Andrew Maddever was cutting wheat as quickly as he could before further rain arrived.

Further north, harvest was about a week later than normal at John Porter’s farm near Hull, but he hoped to finish winter barley today (3 August).

North Scotland was escaping the worst of the weather, said Jim Whiteford, who had finished winter barley at Shandwick Mains, Inverness.

Harvest was about a week ahead of last year, and the earliest spring barley would be sprayed off and ready to combine by the end of the week.

He and father Richard had cut 20ha (50 acres) of Dimension at 10.8% moisture yesterday, before moving on to contract combine organic oats at nearby Sheepdrove Farm today.

Winter wheat was underway at Richard Baker’s Walnut Tree Farm, Rochester, Kent, and yields were down by about 0.5t/acre (1.2t/ha) due to drought in the spring.

So far the 12ha (30 acres) of Hereward had only averaged 7.4t/ha (3t/acre), and other farmers were reporting disappointing results in the area, he said.