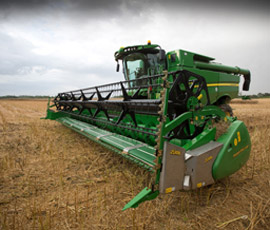 More settled weather in the days ahead should bring combines out in force across the country, with many crops now ripening at the same time.

In Hampshire, harvest has been in full swing at Itchen Stoke Estates, Winchester, and farm manager David Gray is pretty pleased with yields so far, too.

Talisman winter barley yielded a pleasing 8t/ha, with Fentara coming off at 8.5t/ha. Volume, grown for seed, managed 6.75t/ha, which was about par for the course, said Mr Gray.

“As it’s a hybrid grown for seed, we sow male plants around the headland, with the seed crop in the middle, so only get about 60% germination.”

National oilseed rape trial results were starting to come in, but most harvesting was unlikely to start until later this week or early next week.

According to Dr Andrew Smooker, who was co-ordinating all of Monsanto’s UK farm-based rapeseed trials, only the August-drilled rape has been cut so far.

“The average drilling date was 8 September, so it’s still a bit early.”

However, winter wheat and oilseed rape were both ready to cut at Hall Farm, Fornham St Martin, Suffolk, meaning the Long family would have to hire another combine.

“We’ve been waiting for it to die off – and now the wheat has ripened at the same time.”

In Worcestershire, Andrew Symonds cut his winter barley at Lincoms Farm, Hartlebury, 10 days ago, and was loading it out for delivery today.

“It was very average really, but that’s better than we might have expected,” he said.

The 23ha of Flagon yielded 7t/ha across most of the field, although poor headlands probably lowered the average to 6.5t/ha.

“We’ve got 100ha of winter barley to do, and then I think the combine will be packed up for two weeks.”

That would give the farm staff plenty of time to bale the straw and start drilling oilseed rape. “We’ll start drilling tomorrow or Thursday – I just hope after two awful autumns that we get a kind one,” he said.