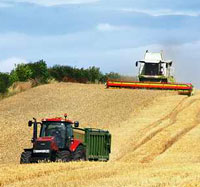 Unsettled weather is likely to keep combines under wraps for much of the weekend, but some are still avoiding the showers to gather in the crops.

Almost 85% of the UK’s winter barley and oilseed rape had now been harvested, according to a report by the NFU.

Almost 15% of wheat had been cut, while spring barley was 5% through, both showing below average yields, it said.

Met Office forecasts suggested weather across the UK would remain changeable, with frequent showers and stormy conditions over the next few days.

“About 85% of the wheat crop is still to be harvested – so what the weather does from now on will be crucial for the speed of the harvest and quality expectations.”

Jon Bond, who farms at Trerule Farm, Trerulefoot, Saltash, Cornwall, said he hadn’t had many decent spells of weather and harvest was now a long way behind.

“We usually finish our winter barley in July – but we’re only halfway through.

“If we had some drying weather now for a couple of weeks we would be okay – it’s not an unmitigated disaster like last year; at least the prices are a lot better.”

Pea and bean prices had increased on the back of lower yield predictions for this harvest, said Phil Rix, president of the British Edible Pulse Association.

“First UK harvest indications suggest peas to be yielding normally and that winter beans too will be satisfactory, despite the drought.

“But concerns about spring bean yields and quality are inevitable.”

Harvest progress was proving extremely variable in central England, with some farmers finishing their wheat while others had scarcely started.

Masstock agronomist Andrew Richards said most farmers had finished combining oilseed rape and spring barley, with many of those on lighter land completing wheat.

But on the heavier land farmers were still trying to harvest second wheats, and were yet to start on first wheat.

“But we had heavy rain and strong wind overnight, so won’t be getting into it.”

Cassata winter barley was disappointing at 7.4t/ha (3t/acre), although quality was good, he said.