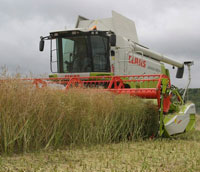 Gallant grown on light soils was averaging 15% down on last year. “The lightest bits of the fields are 20% down, while on the heavier parts it is 10% down,” he said.

But yields were proving surprisingly reasonable at Priors Farm, Peasemore, Berkshire, where George and Richard Brown had cut peas, oilseed rape and wheat.

Viscount winter wheat was running at about 9.3t/ha (3.75t/acre), above the farm’s long-term average but below the past couple of years.

So far the Excalbur had yielded “remarkably well”, at 4.9t/ha (2t/acre), while Castille had been disappointing at 4t/ha (1.6t/acre).

Rapeseed had been very slow to ripen in the area, as Roundup spray had not worked very well this year, he added.

Harvest in Scotland was progressing apace, with winter barley almost finished south of the River Tay, according to Masstock agronomist Jim Rennie.

“General feedback has been good, although because of the severe winter we did lose plants and expectations were lowered.”

Wheat was still about two weeks away from ripening, and was likely to come at the same time as spring barley, causing logistical difficulties, he added.

So far he had only cut 2ha (5 acres) of Retriever winter barley, which had yielded reasonably well, and 10ha (25 acres) of winter wheat for crimping.

“We keep getting rained off, and now I’m fitting a new tyre to the combine which we had to wait to get delivered. But everything is looking well.”