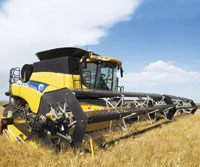 Harvest is progressing apace across the UK, and oilseed rape yields are generally better than expected.

Overall, rapeseed yields were about 3% down on last year, according to Owen Cligg, trading manager at United Oilseeds.

“We are seeing quite a few yield reports from the South and they tend to be holding up quite well, which is good news given the drought and the frost earlier in the year.”

Harvest was about 10% complete in the South, with progress only as far North as Lincolnshire by Tuesday (27 July).

In Cambridgeshire, Anthony Morbey was hoping to get on combining again today (27 July) at Cole Ambrose, Ely, after being hampered by showers.

“We have cut one piece of Castille oilseed rape, which seemed to yield about average, but it’s a bit too early to tell.”

Winter oats were producing an excellent sample at Chessons Farm, Wadhurst, Sussex, where James Fuggle had also cut all his winter barley.

“We started cutting oats yesterday (26 July) and it’s a lovely sample, with a bushelweight of 52-58kg/hl.”