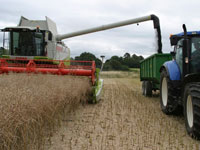 Yields are proving extremely variable this harvest, according to soil type and rainfall earlier in the spring.

But in Wiltshire, James Dean had started combining spring barley at Church Farms, Salisbury, which was extremely variable.

Straw yields were also down, although were heavier on the better ground.

Many farmers in the South of England had cut winter wheat before oilseed rape this year, said Stewart Sinclair, independent agronomist at Hampshire Arable Systems.

Early wheat crops were unlikely to be the best.

“There will be better to come. But yields are all over the place – there are going to be a lot of low-yielding fields, between 4.9t/ha and 7.4t/ha (2-3t/acre), while others are near-record.”

“It is a really good colour and should have a high protein content.” Bushelweights were also good at 79kg/hl. “We are very pleased.”

In East Anglia, winter barley harvest was about 90% complete, with oilseed rape some 70% through, according to Gleadell Agriculture.

Regional manager Trevor Gates said yields for both crops were slightly below average, within a wide band of variation. “It just depends what part of the region they are in and how much rain they got.”