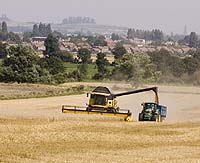 Harvest continues apace in the East of England, but further West and North conditions have been more challenging.

The end of the week should see most farmers finished in East Anglia, according to Stuart Attridge of Harlow Agricultural Merchants.

“Quality is good – first wheats are doing well, but some of the second wheats are a bit variable.”

“On the whole, sample results are pretty good, but we are seeing some lower proteins. On balance, they are below the standard 13% specification.”

In the South of England wheat harvest was likely to be about three-quarters through by this weekend, said Frontier’s Jon Duffy.

“Where the crops went into a good seedbed and were well established, yields have been better than expected across all commodities.”

“We left 200ha (500 acres) fallow last autumn, and at today’s prices we would have been better not to plant those crops which are doing 7t/ha.”

In the South West wheat was scarcely ripe, but early indications of yield and quality were reasonable, said Ian Eastwood, marketing manager at West Country Grain.

Harvest was about halfway through in Somerset, and just 30% complete in Devon and Cornwall.

In Scotland, John Hutcheson was hoping to finish oilseed rape today. “I’m sitting in the field and it’s just spitting with rain on the windscreen – it’s so frustrating.”

The Sequel winter barley yielded a slightly disappointing 8.4t/ha (3.4t/acre), and the Mendel and Cuillin oilseed rape had also been poor, he said.

Viscount winter wheat had been sprayed off for two weeks and was fit to cut as soon as he could get into it. “It needs to be cut in the next few days.”