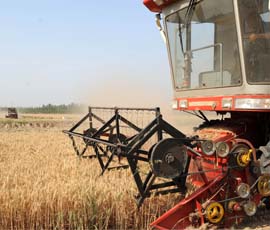 Harvesting has stepped up a gear across central southern England over the past few days, although progress remains decidedly mixed.

According to Crop Watch agronomist, Iain Richards of Agrii, growers in south Hampshire were set to finish everything bar the linseed by the start of next week (w/c 26 August).

But others in the Newbury area of Berkshire were only just starting on their wheat. And there was still plenty of winter rape to be cut, particularly around Swindon, Wiltshire, he said.

“Wheat on our chalk soils has been yielding especially well, at 10.5–11.5t/ha,” said Mr Richards.

“And it’s not just the group four varieties either. We’ve seen Panorama average 11.2t/ha and Solstice reach 10.5t/ha on the Hampshire Downs, with really nice bold samples and bushel weights into the low eighties. What a change from last harvest.”

However, it was a less encouraging picture on the Oxford sands, with crops badly affected by the July heat and struggling to do 7.5t/ha, said Mr Richards.

“This puts a big question mark over how well the December and January-drilled wheats across our area will have coped with the hot spell, hitting – as it did – at a particularly vulnerable stage of grain fill.”

That said, late-drilled winter malting barley had not been anywhere near the disaster Mr Richards feared they might be, having been mauled into the ground last November.

Although very short on tillers, they had benefited from excellent grain fill, to deliver bushel weights more akin to wheat at 70kg/hl – or more in some cases – and reasonable yields of 7-8t/ha.

“Our spring barleys have been superb,” he said. “They’re all well off now at 7.5-8.5 t/ha, with good low nitrogen and screenings for malting.

“With such a large crop the premiums certainly aren’t there – but farmers that sold a decent part of their crop forward will have done very well.”

With plenty of oilseed rape left to cut in the area, Mr Richards said yields were shaping up to exceed last year’s, at about 3.8t/ha.

“Some crops have given over 4.5t/ha but these tend to be the exceptions. And, interestingly, the highest yielders haven’t always been the earliest drilled,” he said.

The main drag on rapeseed yields was the number of large patches in fields, where crops had been waterlogged or eaten by pigeons

“Hybrids have definitely coped with the challenges of the season much better than conventional varieties – overall, our hybrids are yielding a good 10% better.”