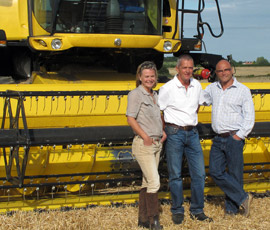 How efficient is the modern combine harvester when you compare it to traditional hand-harvesting?

This is one of the questions that will be posed during a primetime BBC TV programme about this year’s harvest which starts tonight (11 September).

Harvest is a three-part series, fronted by Gregg Wallace and Philippa Forrester, which will show the process of harvest across a range of arable, fruit and vegetable farms in order to shed light on modern British farming.

The main focus of the arable harvest will be on Fletchers Farm near Colchester, Essex, which is run as a partnership between David and Alison Bradshaw and their son Tom. Production includes oilseed rape, winter and spring malting barley, milling oats, fava beans (for export) and marrowfat peas,

Another of the farmers who will feature in the show is neighbouring Essex farmer and Farmers Weekly columnist Guy Smith.

Mr Smith said when he was contacted by the show’s producers he suggested that it was crucial to show how mechanisation had transformed harvest over just a couple of generations.

“In one or two generations we have gone from having hundreds of people involved, to harvest being done with one or two people and a big-capacity machine. I wanted to look at that.”

To investigate how much things have changed the production team worked with Mr Smith to set up an experiment on his farm.

Dealer Ernest Doe provided a New Holland CR8080 SmartTrax combine, which was pitted against a team of volunteers who learned the art of cutting the crop by hand, threshing it and then finally winnowing it to clean it.

We’d like to hear your views on the programme and how it reflects the reality of modern farming. You can either email tim.relf@rbi.co.uk or tweet us @farmersweekly