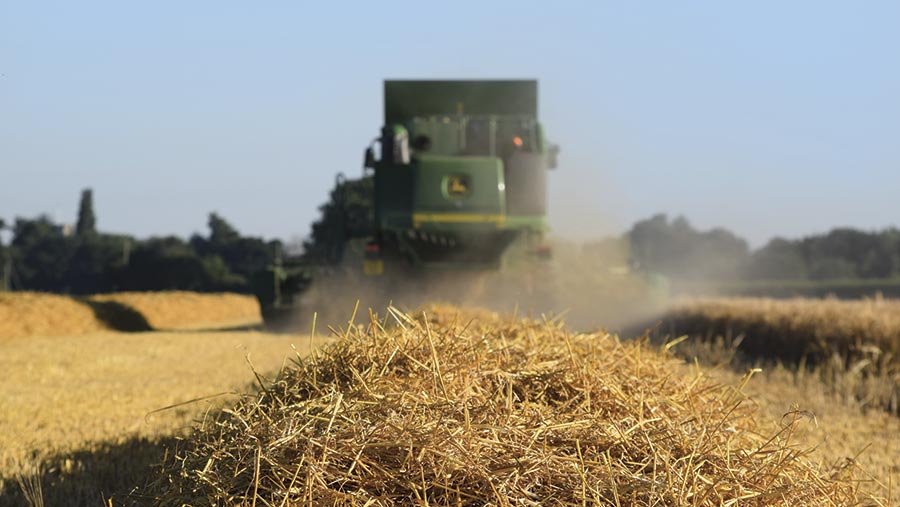 Combines have started to roll in the UK with the first fields of winter barley on light land being harvested in the South, East and as far north as Staffordshire.

The heat wave in late June, which saw temperatures exceed 30C for five consecutive days, hastened the ripening of crops, resulting in barley being cut up to two weeks earlier than normal.

For two growers, harvest started in June and both reported reasonable yields given the recent dry conditions.

Berkshire farmer Steve Whitby’s harvest started on 25 June cutting 18ha of Fletcher Hyvido barley on sand, near Eton in Berkshire. It achieved a specific weight in the mid-60s kg/hl and an “average” yield of roughly 7t/ha.

“It is an area that tends to be early, being on sand, but this is a good two weeks earlier than in previous years,” he reported.

He hoped to make a start on Bazooka winter barley on a neighbouring block of land on Wednesday (5 July).

His wheat crop is now also on the turn and he hopes to spray it off this weekend. “We normally cut wheat in July and it looks like it will be four or five days early.”

He farms light, gravel land at Berkyn Manor Farm, Horton, a few miles east of Windsor in Berkshire and is often one of the first growers to start harvest.

“Yields are reasonable and the bushel weight is good, better than I thought it would be, but it’s not all in the barn yet,” he said.

“My view is that it will be an average yield, but we are pleased given the season that we’ve had.”

“We typically look to start between 15-18 July, so it is about two weeks earlier than average,” he said.

Coming off the combine at 13.94% moisture and with a bushel weight of 67kg/hl, he predicts that yields are likely to be down on last season, saying that the dry spring has had an impact on cropping on the medium-bodied sand land.

There will be no oilseed rape to harvest, after the flea beetle put an end to growing the valuable break crop, so there will be a gap in harvesting after the barley until around 25 July when he expects the wheat to be ready.

South Staffordshire grower Andy Roberts told Farmers Weekly that his harvest looks set to start in a matter of days – this is a good week to 10 days earlier than normal.

“It’s as early as I can remember it being – that hot spell a few weeks ago really moved things on. It’s amazing how well it has come on.”

Mr Roberts farms mostly sandy loam soils to the west of Wolverhampton. The first crop to meet the combine will be the 60ha of Venture winter malting barley that he grows for Molson Coors.

Mr Roberts said the crop looks good as it was past the critical yield-building stage when the hot, dry period hit and so he is hoping for better yields and quality than the distinctly average harvest last year.

Winter barley could be 10 days earlier this year. OSR sprayed off two weeks earlier than last year too. https://t.co/agkltxAiPE

However, the winter wheat is now starting to show the effects of drought and he thinks yields for this crop will have been reduced as a result.

Having been desiccated two weeks earlier than last season, Mr Roberts is also concerned the 60ha of oilseed rape could threaten to clash with winter barley harvesting. He is forecasting a rapeseed harvest start date of 16 July.

Ways to get in touch

In the East, one Suffolk grower kicked off his 450ha winter barley harvest on Sunday (2 July), a full two weeks earlier than last year.

He said the crop of Tower on their lightest land was coming off at about just over 14% moisture and yielding an average of 6.5t/ha.

Grain is ripe and dry on their heavier land as well, and the straw would be dry enough to get into it by the end of the week.

If the weather holds, they will progress rapidly into the oilseed rape harvest he said, with pods ready to harvest now, but moisture in the stem is likely to hold them back for another 10 days.

This early start to harvest in the UK mirrors Europe where both French and Dutch farmers also made an early start with winter barley going a week to 10 days earlier than usual.

In the most drought-affected south-west of the Netherlands, Rien Fieman, head of grain at the co-operative CZAV, says about 20% of the winter barley crop has already been cut in the area. He reported yields ranging from a moderate 6.5 to a good 9.5t/ha, which were good given the drought.

Make sure you’re up to date with all the latest harvest 2017 developments by following Farmers Weekly’s Harvest Live Twitter account, liking our Facebook page, and following us on Instagram. You can get all the news and analysis on the harvest page of the Farmers Weekly website. To add your snaps to our Harvest 2017 gallery on Facebook, just message or email us with your name, where you’re from and a line telling us what’s going on. Throughout harvest we will aim to use as many of your photos in the magazine and online as possible.