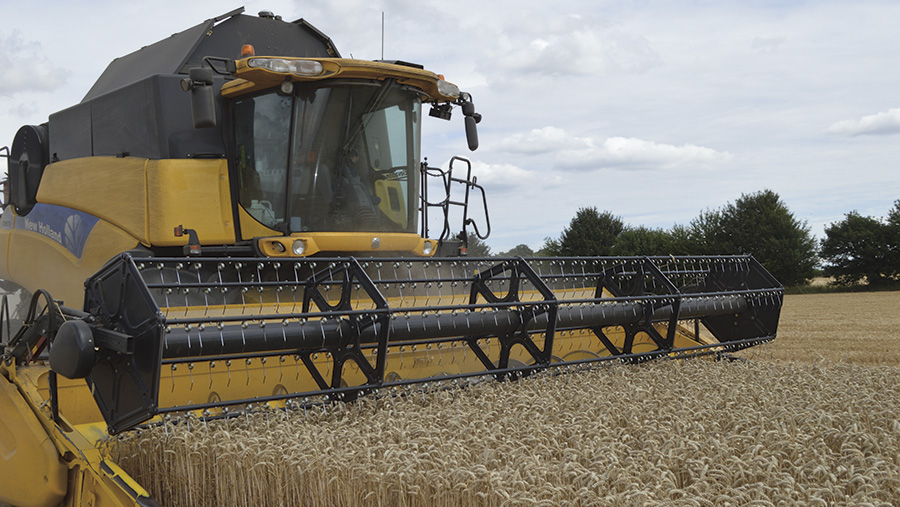 Growers say these later maturing crops may have benefited from rainfall in June and good sunlight in July to show average yields rather than the very poor harvests of winter barley and rapeseed.

Essex grower Guy Smith and vice-president of the NFU is cautiously optimistic about his wheat harvest after rain in late June just after flowering appears to have helped yields.

He was cutting the milling wheat variety Skyfall earlier this week showing yields 10-12% above his farm average with about one-third of his 120ha of wheat crop cut by Monday (1 August).

“Yields are about where they need to be considering the current poor prices,” he tells Farmers Weekly.

Farming in one of the lowest rainfall areas of Britain in north-east Essex, his farm had some 125mm (5in) of rain in June, which is about twice the farm’s traditional June rainfall.

This he believes came at the right time and early grain samples looked good with low levels of fusarium and other ear diseases.

Moisture levels were about 15.8%, although protein levels at 12% were a little low for a milling wheat.

Andrew Tetlow, partner at AWT Farming, says his early results are promising with milling winter wheat yields of 9t/ha with about one-tenth of the group’s 1,400ha wheat cut.

Yields of second wheats grown on lighter land are averaging at this 9t/ha level with specific weight of 74.2kg/hl at 18.8% moisture, which comes as a relief after disappointing yields of winter barley and oilseed rape.

“The early signs on the wheat are more promising and certainly not as disappointing as the winter barley and oilseed rape,” he says.

The business farms around 2,000ha in Essex, Cambridgeshire and Suffolk, growing mainly the milling wheat varieties Skyfall, Crusoe and Edgar.

Further south in Essex, Tom Bradshaw expects to move into his winter wheat by next week, as he is looking to cut spring barley first.

“The wheat looks not too bad but we will be focusing on the spring malting barley as some is showing signs of lodging,” he says.

Mr Bradshaw has 680ha of winter wheat to cut at Fletchers Farm near Colchester, but hopes to make a start on his 300ha of spring barley this week if the weather holds.

He was finishing off his oilseed rape harvest earlier this week which showed poor yields, while his hybrid winter barley looked stunning but only yielded 7.9t/ha at a poor specific weight of 58-62kg/hl.

Farm manager Martin Ford at the estate near Blandford Forum says a start on the farm’s 530ha of winter wheat was made on Saturday (July 30) before rain came earlier this week.

“Wheat is looking good so far with overall yields likely to be about 10t/ha,” he says.

He has cut 180ha of Maris Otter malting winter barley which yielded at the estate’s long-term average of 6t/ha with a surprisingly good specific weight of 69kg/hl when many early barley crops have dipped below 60kg/hl.

He is looking to cut 60ha wheat then turn to 180ha of spring malting barley before returning to the rest of his feed wheat.

Guy Taylor in east Cambridgeshire has also decided to prioritise spring malting barley ahead of feed wheat, and has cut a fifth of his 100ha of Propino barley.

“The spring barley is looking good and considerably better than the winter barley,” he says.

Winter barley on light land averaged 6.25t/ha, but the malting spring barley was coming in between 7.5t/ha and 8.75t/ha on the 380ha Simon Taylor Farms just south of Newmarket.

He adds winter barley and oilseed rape yields were hit hard, but the winter wheat and the spring barley, which flowered later, looked good.

He expect to cut some of his 100ha of wheat by the end of this week.

Philip Darke, managing director of grain co-operative Camgrain says he has seen very few samples of wheat coming in and what he is seeing is of variable quality.