Although yields are down on the bumper harvest of 2015, lower drying costs, decent quality and better prices over the past few weeks are helping compensate for less grain in the barn.

The lack of sunlight in June is the main culprit behind the lower yields, but later-maturing wheats have clearly performed better than early cut winter barley.

Initial signs are wheat quality is generally good, but the picture is rather patchy with some very good samples being mixed in with some that just meeting the needs of animal feed compounders. 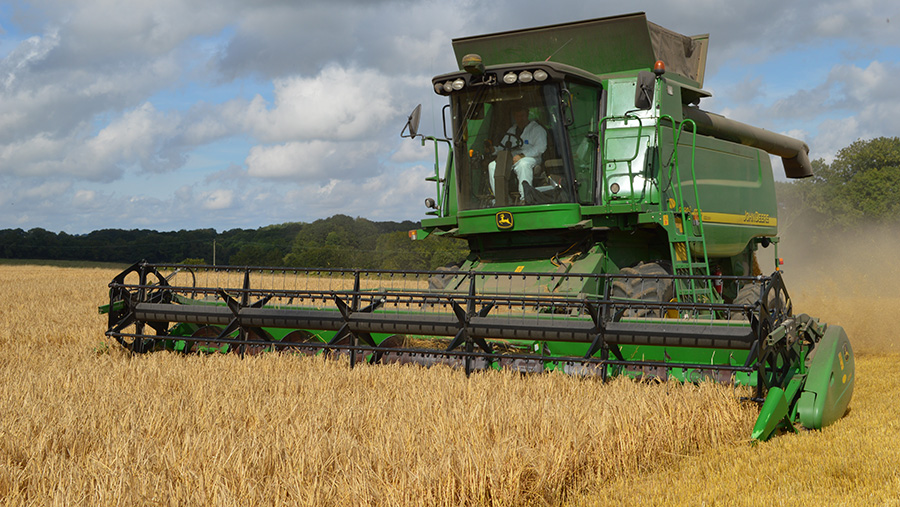 The first batch of winter wheat on one Dorset farm showed excellent quality although yields of the breadmaking variety Crusoe were down on the bumper harvest of 2015.

Jim Farquharson at Eastbury Estates has cut 80ha of Crusoe at a reasonable yield of 10t/ha, but the grain gave an impressive protein of 13.96%, high Hagberg of 450 and specific weight of 78-79kg/hl.

Although the yield was down on last year when his best Crusoe field yielded 13.8t/ha, he was very pleased with the quality, as he prepared to start cutting another milling variety Skyfall.

He was also pleased with his 70ha of Propino spring malting barley, which resulted in a yield of 7.5t/ha, as the later-maturing crops showed better yields on his light chalky soils than winter barley.

“The spring barley was a lot better than winter barley and the quality looks good with low screenings,” he tells Farmers Weekly.

Screenings were below 2%, although there were no details of grain nitrogen.

Winter barley averaged a “poor” 6t/ha, while oilseed rape came in at 3.8t/ha on the estate at Tarrant Gunville, five miles north-east of Blandford Forum.

He started wheat harvest in earnest at the end of last week (12 August) cutting the variety Skyfall with yields of more than 10t/ha, which is giving a good bold grain sample.

“The crops have stayed greener for longer, and looked as if they were putting on yields as they stayed green.

Mr Eckley grows about 300ha of milling winter wheats on his Weald clay soils at Saynden Farm on the edge of Staplehurst, some six miles south of Maidstone.

Yields improving in the fens 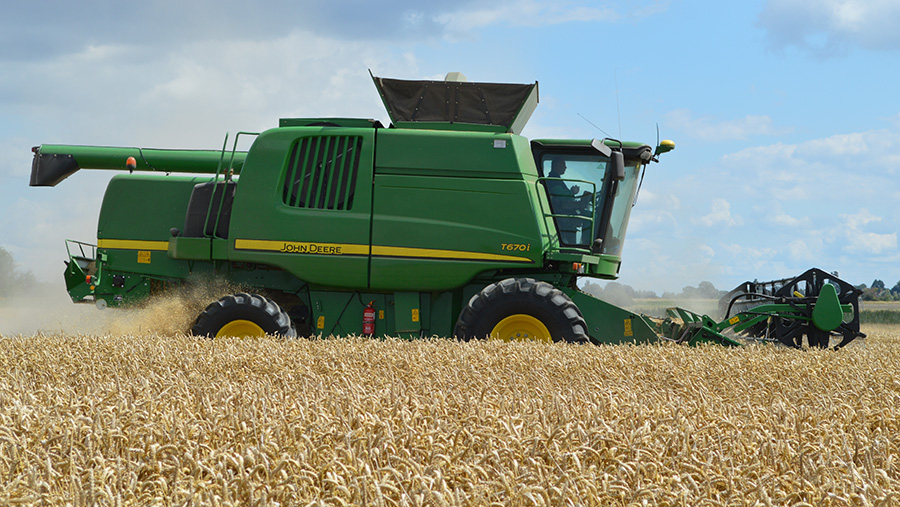 Further north, wheat yields were lower on the Cambridgeshire fens with Stephen Edgley reporting yields down, but he was seeing an upward trend as he moves further into his wheat crops.

He started off with yields of about 7.5-8.0t/ha with the feed wheat variety Santiago on his heavy silt soils, down from the 2015 harvest when average farm yields were about 10-11t/ha.

Yields have since picked up as harvesting moved onto more free-draining soils with the feed variety Evolution seeing yields of about 9.0-9.5t/ha, closer to the 10t/ha which Mr Edgley would have expected.

“I am a little more upbeat on yields than when we started on the wheat, but it is still under what I would have been looking for,” he says.

The lack of sun in the early summer was largely blamed for producing pinched rather than plump grains leading to the lower wheat yields on the farm.

He had cut about two-thirds of his 390ha of winter wheat by Monday (15 August) on his 900ha arable operation based at Nightlayer’s Farm, near Chatteris.

Yields off in Lincolnshire

Further north, David Hoyles is reporting lower-yielding crops on the edge of The Wash in south-east Lincolnshire, with wheat yields down 20% on his five-year farm average.

He is hoping to finish harvesting his 170ha of winter wheat at Monmouth House, Lutton, 12 miles east of Spalding on Tuesday (16 August) with average yields about 10-11t/ha compared with last year’s bumper average yield of 14t/ha.

“Yields are disappointing, but they could have been worse after low levels of sunlight in June and July,” he says.

Specific weights have been just above the feed compounders’ minimum specifications of 72kg/hl on his very fertile silt soils, where he also grows intensive vegetables.

His highest yield last summer was a field of Evolution feed wheat at 15.61t/ha, while he broke the UK wheat yield record back in in 2011 with a crop of 14.3t/ha.

His best-yielding variety this year was newcomer feed variety Motown, which comes up for possible inclusion in the AHDB Recommendation Lists later this year.

The variety yielded over 12t/ha and shows real promise, he says.

The next best feed wheat for yields was Evolution, followed by Graham and then Britannia.